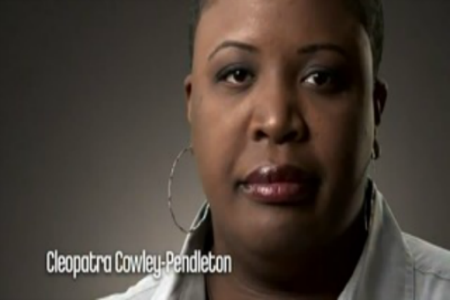 NBC NEWS – Cleopatra Cowley, mother of the Chicago teen shot and killed just a week after performing at President Barack Obama’s inauguration, is featured in a new public service announcement calling on Congress to reform the nation’s gun laws.

In the ad, paid for by Mayors Against Illegal Guns, Cowley advocates for universal background checks on all gun sales. “Tell Congress to support commonsense reforms so no more innocent children are killed. And no parent has to go through this heartbreak.”

Cowley’s daughter, Hadiya, has become the one of the most recognizable faces in President Barack Obama’s efforts to curb the country’s gun laws. First Lady Michelle Obama attended the 16-year-old’s funeral earlier this month.

Cowley herself has also become a leading figure in the fight to pass stricter gun control laws. She and her husband sat next to the first lady during last week’s State of the Union address, where the president told her story as part of his attempt to call on Congress to act.