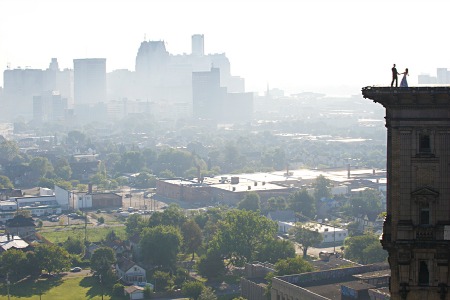 In wedding photographer Ryan Southen’s images you’ll sometimes find not two, but three beloveds sharing the frame. That is, one happy couple, and Detroit, beloved by lovers and photographers alike.

Though 26-year-old Southen shoots weddings all over the metro area and out-of-state, he has a special connection with the city. Detroit is where Southen fell in love with architecture, ever since he was a teenager driving down to explore the city from Rochester Hills.

Southen studied architecture at Lawrence Tech, but soon became disenchanted with the technical aspects of the discipline.

“But in the process, I picked up a camera,” he said. After commercial and architecture work dried up during the recession, he found himself shooting weddings, and fell in love with the work. You can tell in his photos — richly detailed, many are washed with a dreamy golden hue.

Beyond the modernist paradise of his home since last year, Lafayette Park, he’s always been drawn to the city’s abandoned buildings. Though he’s stopped photographing them in the last several years, he thinks they’re part of what makes Detroit beautiful, even romantic.

“I find there’s beauty in decay, in a city that’s rough around the edges, and when you throw a couple into that it brings out [their love] even more,” he said.

Plenty of his subjects have agreed with him, which is why he found himself directing a nicely dressed couple to crawl through a hole to get into Michigan Central Station for a shoot in 2009.

“That was a surreal moment,” he said. But he warned that was shortly before security intensified, and though he gets requests for it all the time, no longer shoots there.

Though not one couple has shown him a place in the city he was unfamiliar with, he does have a wish list — he’s hoping to get the chance to photograph weddings at the Ford Piquette Plant and the Museum of Contemporary Art in Detroit.

The down-to-earth but romantically-minded photographer could also see himself getting married at the art museum.

“With my job … I can’t believe there’s many guys out there who know what kind of wedding they want before they’ve met the person,” he said. “Small and intimate, nothing too crazy. I like Belle Isle or MOCAD, someplace cool or offbeat.”

To him, the most romantic spot in Detroit isn’t an upscale restaurant or theater, but the tip of Belle Isle.

“You’ve got Windsor and the Detroit skyline opening up, and it’s just peaceful,” he said.

Southen observes love for a living. But has being around couples constantly made him cynical about relationships? It seems not.

“It just reinforces that everybody wants somebody else,” he said.

And does he think Detroit is a romantic city?

See some of Southen’s work featuring happy couples with the beautiful — even romantic — backdrop of Detroit below, and visit his website for more.