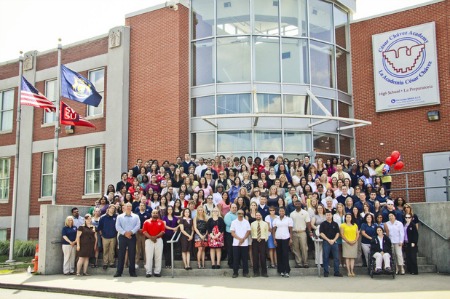 Union isn’t a word that’s often associated with charter schools, but that might be changing in Michigan. The teachers, counselors and social workers of Cesar Chavez Academy, Detroit’s biggest charter school system and one of Michigan’s largest, chose overwhelmingly to form a union Thursday.

They voted 88-39 to certify the Michigan Alliance of Charter Teachers & Staff as their official bargaining agent. It’s only the second time a Michigan charter school has chosen to organize under the union, which is affiliated with the American Federation of Teachers Michigan (AFT Michigan).

The four campuses of Cesar Chavez Academy serve about 2,000 students in Detroit. They are run by the Leona Group, a charter operator that handles more than 60 schools in Arizona, Florida, Indiana, Michigan and Ohio. Cesar Chavez is the first of Leona’s schools systems nationwide to opt for a union, according to the Detroit Free Press. The successful election is a significant victory for Michigan’s labor movement, which is still reeling from the recent passage of right-to-work legislation in the state.

“I am beyond excited. This is a moment in history and now we have a voice. We’re ready to make positive changes,” Flordemaria Garay, a social worker who works with the Cesar Chavez Academy Middle School told The Huffington Post.

Lynne Santoscoy, another social worker, said she was happy that employees would be able to negotiate their own contracts. She also hopes the union can help institute policy changes like establishing sex-education classes and publishing a crisis intervention manual for the school.

Tashaune Harden, an eighth-grade science teacher, told The Huffington Post she was “relieved but anxious” about the vote. Like many of the other staff members, she would like to see changes in school procedures. She’d like to have a Spanish translator present at school board meetings, since the schools are located in an area of Detroit with many Spanish-speaking families. Noting the participation of parents in the union drive, she also hopes the establishment of a teacher’s union will encourage more families to get involved with the school process.

“[The election] was encouraging. It makes me feel the majority of the members of the district want to be involved in decisions that affect them on a daily basis,” she said, “[but] I don’t think the work is over.”

Mike Atkins, general counsel for the Leona Group, told the Detroit Free Press, he had heard of communication problems in Cesar Chavez’s middle school and upper elementary schools, but said there had been a change of leadership at those facilities. The new people in those positions had “been well-received by the staff,” he said.

“We want everybody to to take ownership in the school and the whole reason that school works is through innovation and the thoughts and the suggestions that come from staff people,” he said to The Huffington Post in a prior interview.

Although, Atkins told the Free Press, Leona wasn’t typically an advocate for unions, he said the operator would “recognize the employees’ rights to organize.”

Nate Walker, an organizer for AFT Michigan, said teachers and other school employees had failed at an earlier attempt to unionize — so they contacted his union last year to raise their chances of succeeding this time. Walker believes the unionization of charter school teachers and staff could have important implications for the broader policy debate over education reform.

“They’re talked about, but they’re not talked with,” he said. “They’ve chosen to be part of the education reform discussion and that means they’ll be able to contribute without fear for their own job security.”