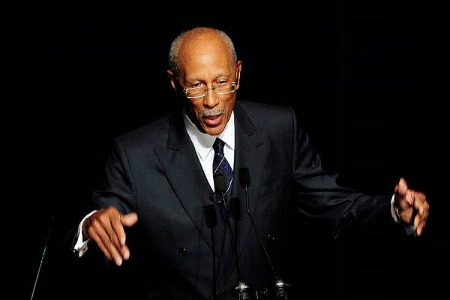 One night after President Barack Obama’s first second-term State of the Union address, Detroit Mayor Dave Bing has something to say to his residents.

Bing’s fourth State of the City address since taking office focused on the positives while still calling for immediate action to handle the city’s most pressing concerns. Speaking on Wednesday to a packed crowd at the Detroit School of Arts, the mayor mapped out a plan for what he believes will tackle a major issue affecting the community.

A significant highlight of Bing’s speech was the announcement of ‘Detroit I’, an initiative tasked with the goal of reducing violent crime in the city. The new program to be unveiled next month summons residents to support its cause. Bing described it as a “collaborative crime reduction strategy” that seeks to bring together law enforcement at all levels. Under the immediate leadership of the Detroit Police Department, ‘Detroit I’ will prioritize getting tougher on gun use and gang violence, as well as engaging the community in such efforts.

Gun violence has become a topic of discussion across the country in light of recent national events. Yet, it is of special concern to urban communities that continue to witness isolated yet back-to-back episodes.

Detroit recorded just over 400 murders in 2012. The devastating feat is just shy of neighboring Chicago, which received national attention for reaching last year’s total of 500. It’s one thing to talk about mass shootings that occur sparingly across America, but it’s entirely different to consider such carnage that takes place on a day-to-day basis. Violent crimes continue to strip our society of its potential. They destroy what should be young, vibrant generations, and even threaten the security of older ones.

Despite addressing one of Detroit’s biggest dilemmas, Bing urges residents to stay positive and look on the bright side of things when it concerns the city. He noted, “despite the naysayers predictions there have not been any payless paydays, no emergency manager to date, and no declaration of bankruptcy for the city of Detroit”. The cash flow crunch, however, continues to rear its ugly head. Recognizing its threat to the present and future, Bing cited spending cuts and slicing the city’s payroll as what he believes are actions that will help Detroit recover.

Bing did not address whether or not he will run for re-election in 2013. For now, as evidenced in last night’s speech, he is focused on the present. Will he make the most of what might be his final months in office?