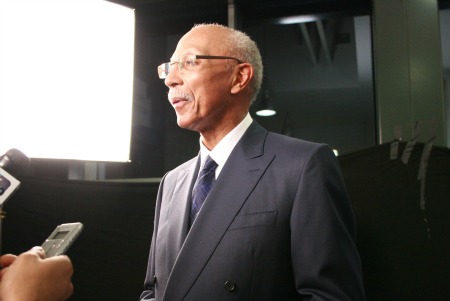 In his State of the City address Wednesday evening at the Detroit School of Arts, Mayor Dave Bing worked to keep a positive theme despite numerous hardships facing the city.

“The picture is not all doom and gloom,” He told the crowd of more than 300 people. “Too often, people focus on the negative things in our city.”

In the 50-minute speech, Bing outlined the progress his administration has made to offset the financial crisis and announced initiatives to help address blight and crime.

Bing announced a new public-private partnership between his office and a non-profit group created by Pulte Homes, a national development company based in Bloomfield Hills.

“When I took office, I vowed to demolish 10,000 vacant and dangerous structures throughout the city in my first term as mayor,” Bing said noting that 6,700 of these have been demolished since he took office in 2010. “We will reach our goal by the end of this year.”

Bing also announced “Detroit One” a new crime-fighting plan targeting gun violence and gang activity which involves the collaboration of local, state and federal law enforcement to crack down in crime in the city. He did not go into details but said interim Police Chief Chester Logan would unveil the plan next month.

Plans to restructure Detroit police service are in the works as well. This spring Bing said the DPD will move 100 officers to street patrol and criminal investigation. “When restructuring is complete we will have 80 percent of our police on patrol,” he said, adding that 15 percent will work the investigative unit and only 5 percent will hold administrative roles.

Though the city is engulfed in a myriad of urgent issues, everything “takes a backseat,” to fighting crime Bing said in an interview following the speech.

Bing also announced the expansion of target neighborhoods for his Detroit Works initiative, geared to direct services and perks to the city’s thriving neighborhoods and encourage population consolidation in certain areas of the city. Chalmers Park, the Villages, and Russel Woods will join the three existing Detroit Works target areas the North End, Southwest Detroit, and Palmer Woods.

Bing also acknowledged the difficulties his administration has faced with a growing deficit, and the constant threat of an emergency manager looming.

“The options are not pretty,” he said regarding the city’s cash flow crisis. “Despite naysayers predictions there have not been any payless paydays. No emergency manager to date,” he said to a chuckle from the audience.
Bing did not discuss the likelihood of Governor Snyder appointing and emergency financial manager to the City of Detroit. “A financial emergency still exists and requires our urgent attention. Time is not our ally,” he said in his speech.

When asked post-speech if he thought the city would fall into state receivership this year he avoided a ‘yes’ or ‘no’ response.

“To be honest, I don’t worry about that. I don’t think about that. That is something that is beyond my control,” he said.
The city is currently under state review to determine whether Gov. Rick Snyder should appoint an emergency manager to take over the city’s wobbling finances this year.

Snyder said last week in an interview that he has a short list of candidates for the Detroit emergency manager job, but that nothing was final.

In the annual address, Bing said the State’s cuts in revenue sharing to Detroit is largely to blame for the city’s current deficit.

“We also have to put in perspective the State’s role in our city’s deficit over the years,” Bing said. “The total amount in cutbacks in state revenue sharing to Detroit over the past 11 years is more than $700 million. Detroit’s current general fund deficit is 327 million.”

While Bing said there are no plans to go after money the state has cut from Detroit’s revenue sharing, he said he hopes the state will “freeze the revenue sharing at some level so we can plan appropriately.”

“I would love to get the money back from the state, but the state balances their budget on the backs of the municipalities and it’s unfortunate because they create a bigger problem for us by not giving us what we think we should have,” Bing told MIchronicle.com. “We don’t think we’ve gotten our fair share.”

Bing mentioned key federal and private grants awarded to the city and applauded business leaders like Dan Gilbert and the Illitch family for continuing to make big investments downtown.

Ultimately, Bing said the goal of his State of the City address was to restore hope and focus on the city’s progress in a challenging time.

“There is no doubt about it, working together we can transform Detroit,” Bing said. “We can’t—and won’t—give up on our city.