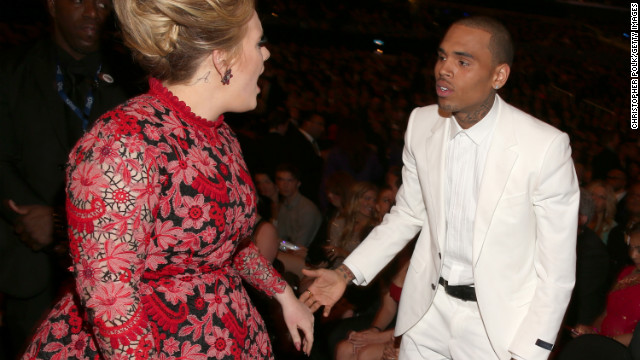 Adele received kudos from some corners of the Internet earlier this week after a photo surfaced of her appearing to go off on Chris Brown at the Grammy Awards.

The photographer caught Adele in the middle of saying something to Brown, who wasn’t wearing a happy expression in the photo.

We imagined that he was telling her how much he still listens to “Someone Like You” but others went in a different direction. A prominent theory was that Adele was yelling at Brown for not standing and applauding when Frank Ocean, the R&B star Brown allegedly fought with pre-Grammys, won the award for best urban contemporary album. Brown was also nominated in that category.

The theory that Adele was arguing with Brown didn’t hold much water thanks to another photo that showed the two smiling together, and Adele confirmed via Twitter Tuesday she was simply being friendly.

“Chris Brown and I were complimenting each other in that photo actually!” the nine-time Grammy winner said. Which we guess is how this happened: