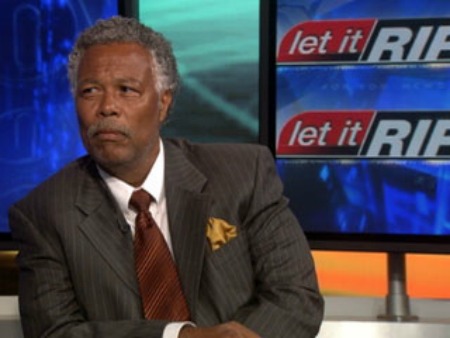 One of Detroit’s poster children for corruption, Sam Riddle, is again a free man after a 37-month stint in federal prison and house arrest. In 2010, Riddle pled guilty to conspiring to take bribes and then lying about it.

After recently completing his sentence, the former political consultant is not abandoning his knack for political strategy. In fact, he sees it as a source of redemption.

In a Sunday, Feb. 10 appearance on Fox 2’s Local political gab spot “Let It Rip,” Riddle aired his grievances with Federal investigations, local reporters and apologized to the citizens of Detroit.

“I’m adopting the Al Taubman principal of redemption,” Riddle said, referring to a Michigan developer’s felon-turned-philanthropist approach. “He gives dollars, I give advice to try and make Detroit a much better place for all of us.”

Riddle, sitting side by side with Fox 2’s Charlie LeDuff, took shots at the journalist who called him a “rakish conman” and a self-described “pimp” in his new book.

“You, Charlie are the biggest pimp in Detroit,” Riddle fired.

“I may be, but at least I didn’t steal from the people of Detroit,” LeDuff shot back.

As for his friendship with Conyers, Riddle says it’s over.

“I don’t talk to her at all. What is there to talk about? We don’t have a basis for a relationship. I know that she’s a good mother, that she takes care of her family,” he said.

But Riddle still thinks the feds could do a better job rooting out corruption in governments.

“The Feds are focusing in on the easy targets — these politician’s nickel and dime bribes. Why don’t you target the Carlisle Group, the parent company of Synagro these companies are bribing entire governments?” He asked. “Go after the multinational corporations. Detroit is being made a whipping post by the State of Michigan, which would like to turn it into a plantation.”

Riddle, who has publically addressed his battle with alcoholism, says he returns to society a sober man.

Riddle said he didn’t know if a felony record prevented him for running for public office but that it didn’t matter.

“You won’t see me running for office, I might get elected,” He joked. “If you’re running for Mayor [of Detroit] you’re suffering from acute madness.”