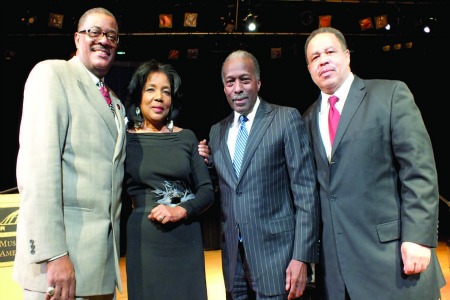 Apparently, when Gov. Rick Snyder appointed Roy Roberts under Public Act 4, the state law that allows the governor to appoint emergency managers with nearly unlimited power to run struggling cities and school districts, he knew what he was doing.

Roberts came before the Black Chamber of Commerce last month at the Charles H. Wright Museum of African American History to not only show his support for the chamber and their efforts to advocate for Black business, but also to further explain his passion for the job he has before him — saving the Detroit Public Schools.

It was obvious from the passion in his voice that Roberts desperately wants to save the children for whom he fights for every day.

It started with a phone call while at his home in Scottsdale, Arizona. Retirement had set in and Roberts was enjoying his wife and family.

“The governor called me and said if I can’t revive Detroit, then I can’t reinvent Michigan,” Roberts said. “He said the single biggest problem I have in Detroit is the Detroit public school system. The kids are not being educated. He said I need your help. I went home and talked to my wife. a nurse and educator. It was not a long conversation. She said if we can help, we should help. We shut down the home in Scotts­dale, came back home here and I got involved.”

Change is never easy, so when Roberts, who is a former General Motors executive, came in and started to use many of experience to change a culture, there was an enormous amount of discomfort.

So far during his tenure, Roberts has implemented a “zero base” budgeting system for DPS that requires every expense to be justified. He managed to lower the DPS deficit to around $83 million from a peak of nearly $327 million under Robert C. Bobb.

Roberts also consolidated everyone into one building, spent $1.7 million to upgrade all of the facilities and therefore saved 2.2 million dollars in perpetuity.

Chamber members were not only there to hear Roberts talk about his DPS accomplishments, but to ask questions about potential opportunities with DPS.

And while no promises were made, Chamber President Tony Stovall, said he would do everything he could to make sure that whoever came before Roberts did so in the right the manner, where it would not only benefit them, but more importantly, the nearly 66,000 kids who are attend Detroit Public Schools.

“It’s called relationships,” Stovall said. “I think we need to be a little more prudent before we start casting out all these opinions on someone we haven’t met. When I sat down and met with Mr. Roberts (I knew) this was a gentleman we can trust.