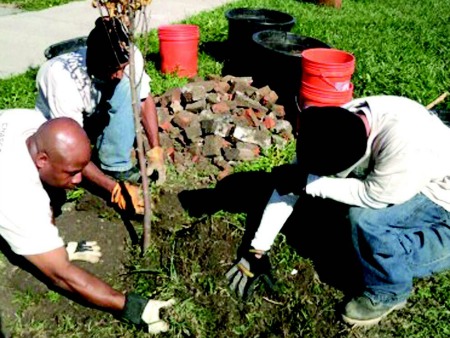 Graceful elm trees once lined the streets of Detroit, forming vaulted tunnels of shade through most neighborhoods. But that all changed when the Dutch elm beetle arrived in the United States in 1930 and pretty much wiped out most of Detroit’s tree canopy by 1980.

The next major devastation to the city’s tree canopy occurred around 2002 when the Emerald Ash Borer beetle wreaked havoc on metro Detroit’s ash tree population, killing tens of millions of these trees.

In a city on the brink of financial disaster, there are few funds to reforest the streets. The consequences of this are significant because trees play such an important role in protecting the environment. They help clean the air, provide shade and cooling in the summer, reduce carbon emissions and help fight climate change. In addition, there is research indicating that neighborhoods with healthy tree canopies have lower crime rates.

For example, a recent study by the U.S. Forest Service shows that trees might actually help reduce crime in big cities. The study was focused on certain districts in the city of Portland, Oregon, and examined the connection between neighborhoods with large tree canopies and crime. After two years of the study, researchers concluded that areas with more tree coverage had lower violent crime rates.

Along with Portland, many other cities around the nation have found a pattern that the more vegetation a neighborhood has, the lower the crime rate. According to urban forestry and urban greening research, “the presence of trees and well-maintained lower understory vegetation can transform barren spaces lands into pleasant, welcoming, well-used places. Such common spaces serve to strengthen ties among residents, increase informal surveillance and deter crime, thereby creating healthier, safer urban communities.

Perhaps Detroit and other high-crime cities need to add a reforestation component to their crime-fighting plans. Safer streets may become an added benefit to the newly released Future Detroit plan.

Editor’s note: Patricia Hubbell is director of marketing for The Greening of Detroit. She previously was a communications planner for Blue Cross Blue Shield of Michigan.