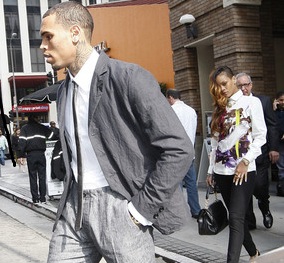 Los Angeles (CNN) — Rihanna left no doubt about how she feels about Chris Brown and the probation he’s serving for beating her up four years ago.

The pop star sat behind Brown in court Wednesday while a prosecutor asked a judge to order the singer to restart the community labor that is his punishment for the felony assault conviction.

It was Rihanna’s second time in a courtroom with Brown. The first was the day in August 2009 when Brown was sentenced to five years’ probation and ordered to stay away from her. Then, she was a witness for the prosecution.

“She thinks it’s utterly ridiculous what they’re doing to him,” Brown lawyer Mark Geragos said when a reporter asked why his assault victim was in court.

The Los Angeles County district attorney’s office has “tortured” Brown during his probation worse than any client he’s ever had, Geragos said.

In a court filing this week, prosecutors accused Brown of not completing the 180 days of community labor ordered when he pleaded guilty to the felony assault charge.

The paperwork Brown submitted to show he had completed community labor is “at best sloppy documentation and at worst fraudulent reporting,” District Attorney Jackie Lacey said. Brown wasn’t in town on some of the dates reported, the motion said.

Geragos, however, angrily disputed the charges, calling them “absolutely false.”

“And I don’t mean just false, it is fraudulent,” Geragos said after the hearing.

Brown’s attorney said the prosecutor’s filing was so fraudulent that he would ask the judge to punish the deputy district attorneys involved and call for a contempt of court hearing for filing false documents with the court.

Los Angeles County Superior Court Judge James Brandlin set a hearing for April 5 for Brown to return to court, but a full hearing on the allegations will be held later.

The ever divisive Chris Brown

Brandlin ordered Brown to report to his probation officer within the next two days to be interviewed for a report that will be used at the hearing.

Despite the serious allegations outlined in the court filing, the prosecutor is not asking for Brown’s probation to be revoked and the singer sent to jail. She is asking the judge to order him to restart his 1,400 hours of community service under the supervision of a Los Angeles probation officer.

Brown got an unusual deal when he pleaded guilty that allowed him to complete his court-ordered community service in Virginia, under the personal supervision of Richmond Police Chief Bryan Norwood. Normally, community service must be supervised by a probation office.

The district attorney alleged that investigators he sent to Virginia discovered that Brown’s mother supervised most of it, and they found evidence it was never done.

In response, Geragos said he’s received 10 e-mails in the past day from Richmond police officers and firefighters “who observed Chris doing his community service.”

“I’ve got pictures, I’ve got witnesses,” Geragos said. “I’ve got what they don’t have. We have evidence that he did it.”

The motion also accused Brown of violating probation by punching singer Frank Ocean at a Hollywood recording studio last month, threatening to “bust” — or shoot — the singer. It also notes a Miami incident during which Brown allegedly stole a fan’s cell phone and a chair-throwing incident after a “Good Morning America” interview.

Also, Brown’s claim to have medical marijuana license, which used to defend against a drug test result, was invalid because the acupuncturist who wrote it was not licensed to prescribe drugs, the motion said.

This Friday marks the fourth anniversary of the night Brown punched Rihanna inside a rented Lamborghini on a Hollywood street, leaving her face bruised and bloody.

Rihanna and Brown broke up after he was arrested for assaulting her, but they’ve made no secret in recent months that they are a couple again.