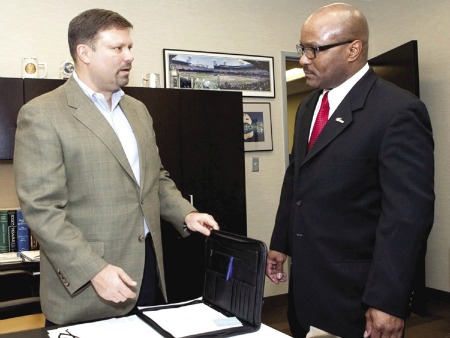 According to Andrew Arena, executive director of the Detroit Crime Commission (DCC), the mission of the DCC is to look at criminal enterprises that are flying under the radar, and which law enforcement can’t get to, as well as quality of life issues around the city.

Arena, former director of the Detroit FBI Office, said the DCC came up with two programs to address those. The first is criminal investigations.

Crime commissions are nothing new, Arena said. Chicago has had one for almost 100 years, New Orleans for almost 60. The Detroit Crime Commission got its start two years ago, when some local businessmen and attorneys who took a hard look at crime and quality of life issues in the city, asked various law enforcement agencies what they could do.
Arena, then special agent in charge of the Detroit division of the FBI, was one of the people they spoke to.

“I remember my advice to them was ‘we can use all the help we can get, if you guys are willing to fund something like this, as long as you define the mission and the goals and basically a lane within which this organization would work,’” he said.

He also recommended that they speak to Michigan State Police Inspector Ellis Stafford and FBI agent Ron Reddy, who have both since retired from those organizations.

Arena described Reddy, now deputy director of the DCC, and Stafford, now operations director, as the “proud parents” of the organization.

He was subsequently asked to run the DCC, but wasn’t yet eligible to retire. That changed last spring. And Arena decided to stay in Detroit, where he grew up, because he wanted his kids to grow up here, too.

He joined the DCC on July 2.

The DCC is licensed by the state as a private investigation organization. Arena and his colleagues wondered how they would investigate criminal activity, given that they do not have subpoena or arrest powers. However, their reputations in the community has led people to bring things to them.

He said people seem more willing to talk to them because they’re not cops. There’s also a trust factor.

“They will tell us things they probably wouldn’t have told us when we were with law enforcement,” he said.
Stafford said investigations often involve significant paperwork. In some insurance fraud cases, documentation comes in stacks of paper four feet high. He said no department has the time and resources to analyze all that data.

By contrast, the DCC has hired analysts. And Stafford said the organization has a “marriage” with U of D Mercy with regard to interns who “know how to apply analytical tools to data.” Most police departments don’t have that.

Stafford also said most people who come to the DCC with boxes of materials have, more often than not, already approached overworked local law enforcement officials who don’t have the time to look at those materials.

DCC Director of Development Steffanie Samuels said the Commission has professional analysts as well as interns.

Arena noted that the DCC is actively looking at corruption cases and has referred more than 30 to law enforcement agencies. In some instances, the DCC has brought cases to fruition. Arena said it turned one over to the Wayne County Prosecutor’s Office.

The DCC has also given cases to the FBI, Secret Service, Michigan State Police, and the Bureau of Alcohol, Tobacco and Firearms. However, the bulk of the work has gone to the Detroit Police Department.

The “coverage area” is tri-county, but Arena said it’s been difficult to get out of the city. The Commission is in discussion with the Oakland County Sheriff’s Department about combating gang activity.

According to Stafford, the support the DCC enjoys from law enforcement and elected officials comes from the Commission being circumspect. He and Reddy spent two months on a “listening tour,” hearing from those individuals.
Arena added that they also spoke to various community groups.

Stafford said a UDM study found that quality of life issues were of primary importance. People were concerned about abandoned houses, open, dangerous and vacant properties, and barking dogs. Violent crimes trended number seven.
Nuisance abatement is the second program. Arena said it feeds the DCC’s investigative aspect, especially given that a large number of burned houses in the city have the same owner. He said the DCC will go after those owners civilly, but they will also investigate criminal activity.

The DCC also focuses on the large-scale slum lords, those who own several hundred abandoned or blighted houses that become bastions of crime.

Arena said some slumlords are abating the nuisance after getting a letter telling them they have 30 days to do so.

“They don’t want the public embarrassment,” he said, adding that the DCC will happily reveal names.
“We’re not law enforcement anywhere,” he said. “We don’t care. We’ll come to the Michigan Chronicle and say ‘this guy’s a slumlord.’”

He also said the DCC received about $100,000 out of a $1 million grant from the U.S. Dept of justice to the Eastern District of Michigan.

The DCC also receives in-kind donations and services, such as interns and about nine pro-bono attorneys.

There are also four interns. Two from UDM and two from the University of Detroit Law School.

The DCC’s initial focus expanded when Wayne County Prosecutor Kym Worthy told them there’s no mechanism to protect witnesses in Wayne County. Stafford set up a safeguard program through which the DCC pays others to take witnesses to some place safe until the trial or grand jury hearing. It’s been used in three cases so far.

Arena said the goal is for the DCC to still be here long after he’s gone, but it also has to be flexible in its mission.

“Our mission in five years may be totally different from what it is today,” he said.

For more information about the Detroit Crime Commission, call (313) ­394-1600 or visit www.Detroitcrimecommission.org.