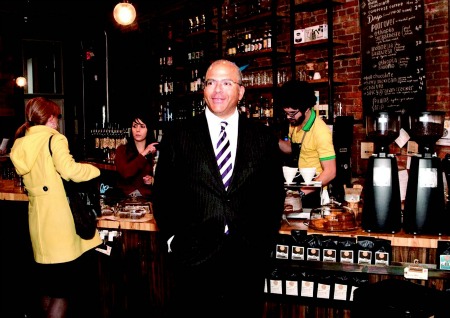 Once rejected, now connected, Detroit is making a unique footprint on defining urban culture. With the announcement of the M-1 rail system, the city of Detroit is not only on the edge of becoming the business address of 25,000 new downtown residents, 200 new storefront businesses along Woodward Avenue and 20,000 new workers, but of developing the kind of street life that demands sister cities take notice.

AT&T’s announcement of its $14 billion investment nationwide to significantly expand and enhance its wireless and wireline IP broadband networks to serve growing customer demand for high-speed Internet access and new mobile, app and cloud services could not be better timed.

Detroit needs the kind of instant access that the upgrades will bring.

“We’re only scratching the surface of what we can do,” said Greg Clark, AT&T regional vice president. “We plan to wire up to one million new locations, including many of Detroit’s new small business locations with the kind of fiber optics the marketplace demands.”

With 11 planned stops along Woodward corridor, M-1 commuters will have the opportunity to experience an eclectic array of new shops and restaurants and still arrive to work on time.

And AT&T’s technology infrastructure investments will make it easier to keep everyone connected along the way, according to Clark, who is helping lead conversations about the importance of incorporating social media, digital coupons and other media platforms into business development plans.

“Investments in the next generation of technology are critically important to Detroit, its residents and our local economy,” Rep. Thomas Stallworth (D-Detroit) said. “As innovation changes the way we communicate, I am grateful that industry leaders like AT&T continue to bring the latest services and advances to the businesses and residents in our community. It is an important part of our efforts to bring Detroit back.”

Urban centers are leading the charge for change, demanding instant access and improved speed and capacity.

“Our lifestyles are driving dramatic change in the way we live, work and play,” said Clark. “Tech-savvy customer wallets are quickly being replaced by the smart phone. Businesses need to be prepared to meet consumer demands for ‘one touch’ transactions. Our Mobile Wallet, currently undergoing final market trials, will do just that.”

Urban dwellers’ desire to off-load to home-based networks will be met by AT&T’s Digital Life services which will provide nationwide IP-based home security and automation services designed to allow consumers to manage their homes from virtually any device — smartphone, tablet or PC.

And for those residents who commute by car, connections will be easier than ever, according to Clark, who cites that more than half of new vehicles are expected to be wirelessly connected by 2016.

“AT&T is positioned to lead the industry as the company’s capabilities expand from vehicle diagnostics and real time traffic updates to consumer-facing applications that tie into retail wireless subscriber data plans,” said Clark.

AT&T already has deals with leading manufacturers including Ford, Nissan and BMW, according to a company spokesperson.

Keeping pace with accelerated demand is a critical component of Detroit’s resurgence, and AT&T’s Detroit-based Michigan operation is firmly rooted in the center of it all.