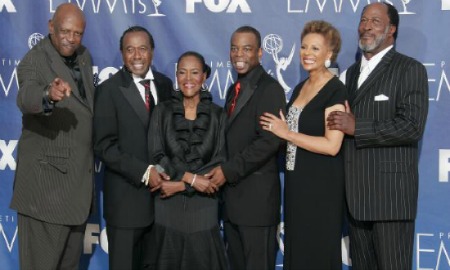 Before Django, there was Kunta.

Nearly everyone has something to say with regard to comparisons between the current blockbuster hit and the mini series that premiered back in 1977. This year marks the 35th anniversary of the television hit that first introduced us to the harsh, brutal realities of American slavery.

The original cast of Roots announced that they would participate in a live Q&A on SiriusXM on Wednesday night. LeVar Burton, Leslie Uggams, and Louis Gossett Jr. will speak with a studio audience, answering questions about the film. The event, which takes place after the broadcast of the mini series, will be moderated by civil rights activist Joe Madison. It will replay on SiriusXM The Power channel 128 at 4 p.m., 8 p.m, and 12 a.m.

Roots is based on the autobiography of Alex Haley, and is one of the most classic, groundbreaking examples of its kind. It was nominated for thirty-five Emmy Awards, and won 14, including best director, best actor, and best writing.

It cannot be denied that Roots had and continues to have a tremendously impact on black culture. Giving viewers the opportunity to speak directly with cast members allows them to answer the most pertinent questions they’ve had about the mini-series. For once, they will get the direct perspective of actors who brought to life characters who have become icons in our memory bank. The big question is, what will viewers ask?