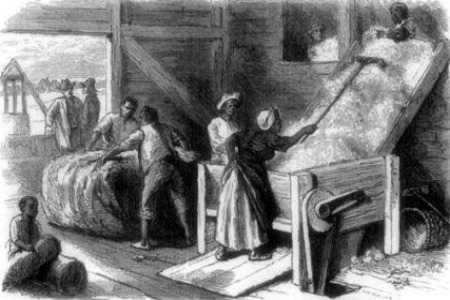 The most commonly used phrase describing the growth of the American economy in the1830s and 1840s was “Cotton Is King.” We think of this slogan today as describing the plantation economy of the slavery states in the Deep South, which led to the creation of “the second Middle Passage.” But it is important to understand that this was not simply a Southern phenomenon. Cotton was one of the world’s first luxury commodities, after sugar and tobacco, and was also the commodity whose production most dramatically turned millions of black human beings in the United States themselves into commodities.

Understanding both how extraordinarily profitable cotton was and how interconnected and overlapping were the economies of the cotton plantation, the Northern banking industry, New England textile factories and a huge proportion of the economy of Great Britain helps us to understand why it was something of a miracle that slavery was finally abolished in this country at all.

Let me try to break this down quickly, since it is so fascinating:

Let’s start with the value of the slave population. Steven Deyle shows that in 1860, the value of the slaves was “roughly three times greater than the total amount invested in banks,” and it was “equal to about seven times the total value of all currency in circulation in the country, three times the value of the entire livestock population, twelve times the value of the entire U.S. cotton crop and forty-eight times the total expenditure of the federal government that year.” As mentioned here in a previous column, the invention of the cotton gin greatly increased the productivity of cotton harvesting by slaves. This resulted in dramatically higher profits for planters, which in turn led to a seemingly insatiable increase in the demand for more slaves, in a savage, brutal and vicious cycle.

Now, the value of cotton: Slave-produced cotton “brought commercial ascendancy to New York City, was the driving force for territorial expansion in the Old Southwest and fostered trade between Europe and the United States,” according to Gene Dattel. In fact, cotton productivity, no doubt due to the sharecropping system that replaced slavery, remained central to the American economy for a very long time: “Cotton was the leading American export from 1803 to 1937.”