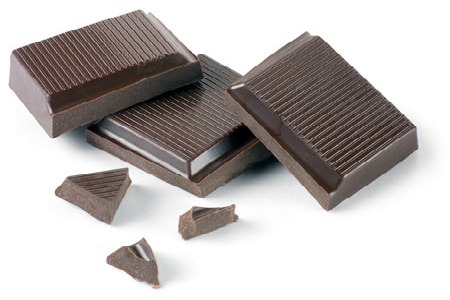 Chocolates come in a heart-shaped box for a reason—certain types really are good for your heart.

Eating dark chocolate regularly is linked to a lower risk of heart attack and stroke. And it’s just plain delicious. So indulge a little.

Like green tea, dark chocolate is rich in flavanols, antioxidants that may product the heart and blood vessels. It’s also a very rich source of magnesium, a mineral critical for a healthy heart as well as for the hormone insulin, which controls blood sugar.

But not all chocolates are created equal. Here’s my guide to how chocolate may help your heart and your moods without stretching your waistline, and to which chocolates are best to eat.

Eat dark chocolate daily. That’s the prescription recommended by Australian researchers recently for people with metabolic syndrome, who carry extra weight around the waist and have a combination of mildly elevated trigly-cerides, blood sugar or blood pressure, and low HDL cholesterol.

The study, published in the British Medical Journal, suggested that dark chocolate could help prevent heart attacks and strokes for these people.

Chocolate’s effects are mild compared to medicines—it may reduce cholesterol by a modest 8 points and blood pressure by 5 points. But less than half of Americans actually take their pills as prescribed, according to the journal
Circulation.

Patients might be more compliant with a prescription for high-quality chocolate with 60 percent cocoa. (Don’t stop taking medications, though—speak with your doctor about any concerns you have and consider chocolate in addition to medicines.)

And chocolate lovers had 29 percent fewer strokes than chocolate avoiders, according to a study in the British Medical Journal.

European researchers found that chocolate may improve the elasticity of blood vessels and prevent some dangerous clots.

Folks who eat chocolate were 19 percent more likely to have normal levels of the good HDL cholesterol, plus they had a 15 percent lower risk of metabolic syndrome compared to chocolate haters. That’s according to the National Health and Nutrition Examination Survey of 15,000 Americans.

Along with helping the heart, chocolate helps the head. Chocolate contains natural mood-boosters such as theobromine. One study of older Finnish men found that those ate chocolate were more optimistic than men who disliked chocolate.

Dark chocolate may help folks with chronic fatigue feel better, too, according to a small study in the United Kingdom.

People who ate chocolate most frequently had lower rates of obesity, in a startling study published in the Archives of Internal Medicine.

Another study found that women can lose weight while eating small amounts of dark chocolate daily. Published in the Journal of the American Dietetic Association, the study found that during an 18-week program including frequent coaching by dietitians, volunteers were able to lose more than 12 pounds while including sugar-free hot cocoa with their breakfast and two snacks of 60-percent-cocoa chocolate.

The two chocolate snacks provided a combined total of 90 calories and were part of a low-calorie, balanced meal plan.

There are some down sides to chocolate consumption, too. Some depressed folks eat more chocolate, according to study in Archives of Internal Medicine. Another study found that some people try to self-medicate their depression with chocolate binges.

Cacao nibs are cacao beans that have been fermented, roasted and crushed—basically unprocessed baking chocolate. Nibs are slightly bitter and crunchy, somewhat like coffee beans. Try cacao nibs sprinkled on top of oatmeal or granola. Or put them in a tea ball and brew in coffee or tea.

Most chocolate bars and cocoa mixes contain more sugar than chocolate, which can cancel out the benefits. Australian researchers recommend chocolate with at least 60 percent cocoa. That means it’s 60 percent chocolate and 40 percent fillers like sugar and vanilla.

When it comes to hot cocoa, commercial mixes have more fillers than cocoa. Homemade hot cocoa has more cocoa powder, and thus more antioxidants and magnesium. Just heat a mug of milk in the microwave, then stir in two teaspoons of cocoa powder, a few drops of vanilla extract, and honey or sweetener to taste.

Moderate amounts of dark chocolate and cocoa can be healthful, not to mention luxurious.