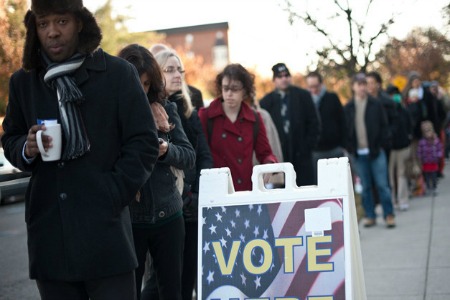 WASHINGTON — As the federal government works to address the long lines and administrative problems voters nationwide faced on Election Day, a new report from the Brennan Center for Justice argues that the first steps should be modernizing voter registration, providing a national period for early voting and setting minimum standards for polling place access.

During his victory speech on Nov. 6, President Barack Obama thanked Americans for turning out to vote, noting many people had waited in line for hours to do so. He made clear that voting reform would be a priority in his second term, when he said that the country needed to “fix” those long lines so that all Americans are able to carry out their constitutional right.

Since then, several lawmakers have introduced election reform bills, and the Justice Department is already working on solutions.

In its new report released Monday, the Brennan Center said the biggest obstacle facing America’s electoral system — and a central cause of long lines on Election Day — is the country’s outdated voter registration system.

Lawrence Norden, deputy director of the Brennan Center’s Democracy Program and author of the report, said he believes that by involving multiple government agencies — such as local Departments of Motor Vehicles, Army recruitment offices and Social Security offices — consenting voters can easily update their registration and as many as 50 million eligible citizens will be added to voter rolls.

Norden also said that using information from as many government agencies as possible would allow voter rolls to be purged of voters who have moved or are deceased, creating more accurate rolls less susceptible to voter fraud.

Modernizing the voter registration system is a proposal strongly endorsed by Attorney General Holder, who has stated that modernization would “remove the single biggest barrier to voting in the United States, our antiquated registration system.”

In addition to modernizing voter registration, the report also proposes setting minimum early voting criteria that all states must meet, but could voluntarily exceed. Early in person voting (EIPV) is not just a matter of making voting more accessible, the report says: it’s a matter of simple math.

The authors are calling for a minimum of 10 early voting weekdays, two weekends (including the weekend before Election Day) and at least one day with hours extending beyond regular business hours.

Excessively long lines were an unfortunate reality of the 2012 election, especially in Florida, where some voters waited up to nine hours to cast their ballots. One report released in January by the Orlando Sentinel found that these long waits have consequences: in Florida alone, at least 201,000 voters did not vote last Election Day because long lines discouraged them from waiting.

Finally, the Brennan Center report suggest setting a minimum standard for voter access — in other words, creating more uniformity between polling locations within each state. Such plans would ensure, for example, that Election Day lines do not exceed one hour by preparing each polling location with the proper number of voting machines, ensuring adequate staffing at each polling location and limiting the length and complexity of ballots.

“One of the most striking things about Election Day 2012, and every presidential contest in recent memory, is how different the experience of voting can be from one community to the next,” the report explains.

Such differences — the report points out — can be problematic. In Ohio during the 2004 election, one county lacked the proper number of voting machines and deterred an estimated 20,000 to 30,000 voters from voting due to congested lines.

Acknowledging that a national “one-size-fits-all” approach would be impossible to implement, the report provides that each state would be required to develop plans that must be approved by a federal agency, such as the Election Assistance Commission or the Department of Justice.

The bill, which stalled in committee during the last legislative session, was reintroduced to the 113th Congress in January.