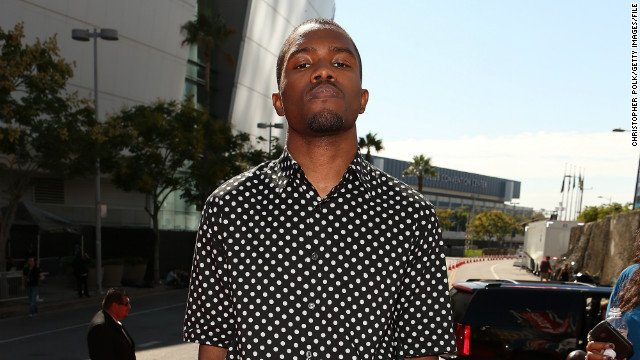 “As a child, I thought if someone jumped me it would result in me murdering or mutilating a man,” the post said.

“But as a man i am not a killer. I’m an artist and a modern person. I’ll choose sanity.”

Authorities are investigating the January 27 brawl, in which Brown is accused of punching an unnamed victim on Santa Monica Boulevard in West Hollywood, the Los Angeles County Sheriff’s Department said in a statement the following day.

Deputies responded to a call of six men fighting over a parking space at a recording studio, according to witnesses. Authorities did not name the man whom witnesses say Brown punched, but Ocean tweeted that it was him.

“(G)ot jumped by chris and a couple guys. lol. i only wish everest was there,” Ocean wrote that night. “(C)ut my finger now I can’t play w two hands at the grammys.”

Ocean also tweeted that he cut his finger and won’t be able to play with “two hands” at the Grammys.

Ocean is nominated for six awards at the February 10 show, including Album of the Year, Record of the Year and Best Urban Contemporary Album, where his competition includes none other than Brown.

According to the sheriff’s department, the fight ended after the men were separated, and Brown and his camp were gone by the time deputies arrived.

CNN reached out to Brown and Ocean for comment soon after the incident, but there was no response.

The dust-up is the latest involving Brown, who has been in the headlines in recent years as much for his involvement in violence as for his performance on stage and in the studios. His many honors include a Grammy last year for Best R&B Album.

He was sentenced in August 2009 to serve five years probation and to spend more than 1,400 hours in “labor-oriented service” for assaulting his pop star girlfriend, Rihanna.

The same day of his sentencing, CNN obtained a probation report for Brown that says the pair were involved in at least two other domestic violence incidents before the February 2009 attack in Hollywood.

The two have recently been spending time with each other — even recording together.

Brown has been in two other highly publicized incidents — one involving fellow musician Drake in New York, and one with writer/comedian Jenny Johnson on Twitter.

Brown and Ocean have a history, as well.

According to MTV, the two exchanged words in June 2011 on Twitter after Ocean seemed to take offense to Brown comparing him to singer/songwriters such as James Fauntleroy and Kevin Cossum.

Ocean reportedly fired back by comparing Brown to Sisqo and Ike Turner.

Ocean appears to put an end to the chapters.

He ended his Tumblr message saying, “Forgiveness, albeit difficult, is wisdom. Peace, albeit trite, is what I want in my short life.”