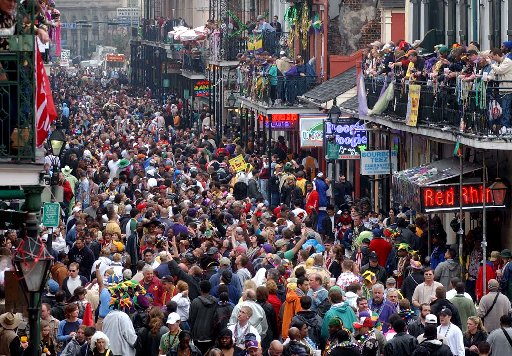 New Orleans is a survivor, a jazzy, diverse and resilient community that knows how to get up off the mat and keep the good times rolling.

Since its founding in 1718, the city has overcome the Great Fire of 1788, smallpox and malaria epidemics, Hurricane Betsy in 1965, Hurricane Katrina in 2005, but can it weather the storm that is Mardi Gras 2013.

Mardi Gras parades began on Jan. 19, but all New Orleans parade activity will pause from Jan. 28 to Feb. 5 due to Super Bowl XLVIl on Feb. 3. But with the advent of the infamous Mardi Gras celebration and Superbowl XLVII coinciding or clashing the Mardi Gras is suspended until after the Super Bowl and will pick0up after the game’s conclusion.

Who ever heard of such, but that is the case. Sources confirm that there will be a three-day moratorium on the traditional festivities for the sporting event with the historic party set to resume once a winner is determined.

But there is never, ever a moratorium on good times in New Orleans and Chronicle staff put together this list to help you navigate the festivities.

Although Fat Tuesday marks the end of Mardi Gras and the beginning of Lent, when many of the faithful forgo worldly indulgences until Easter arrives, New Orleans is a place where pleasure and excess have been elevated to an art form. They are two of the essential elements in the Crescent City’s irrepressible character and inevitable comeback from the tragedy known as Hurricane Katrina. A third principle incorporated in the culture is a concept known as “lagniappe” or “a little something extra.” Lagniappe is as fundamental to the flavor of New Orleans as the French Quarter, the food, the music and the attitude. Rolling out toured the city affectionately known as the “Big Easy” to share with our readers the Best of New Orleans for lagniappe and that extraordinary lifestyle. –roz edward

When you arrive at Louis Armstrong New Orleans International Airport, it becomes immediately apparent that you are in a different land. Cart after cart of stand-alone bars lets you know that there is a different vacation experience in store.

Check into the Westin hotel on Iberville.  The fine accommodations and prime location — walking distance from the French Quarter, the Riverwalk and world-class shopping — make it ideal for your stay.

The Thursday before Easter Sunday is the only day of the year Leah Chase of the eponymous Dooky Chase makes her very special Gumbo z’herbes, an authentic and unique dish which includes nine different types of greens. The iconic restaurant has been a favorite for locals and the elite since 1941, and Holy Thursday is one of its busiest days of the year. Take the St. Charles streetcar to view some of the most desired residences in New Orleans.

The splendor of Victorian and Arcadian style homes in the ultra charming Garden District are the pedigree of the privileged and an enchanting excursion for tourists. The French Quarter is everything that you’ve ever heard it was and more. Crowds are smaller and slightly more contained during this period before Easter,so this is the time to get in and get initiatedto the excitement and the infamy of Bourbon Street and the extravagances of Royal Street. The sign hanging out front of Mother’s extols its claim for serving the best ham in the country. But frankly, that’s not what keeps a perpetual line outside its door. It’s the shrimp creole omelets, gumbo, and crawfish étouffée that have customers clamoring to get in.

If this is a family trip, head over to the Audubon Aquarium to submerge yourself in the underworld of sea life, or if traveling without children, you may want to take the plunge and try your luck at Harrah’s Casino. But since the two are literally across the street from each other, why not enjoy both. While you’re sampling all that divine cuisine that is synonymous with N’awlins, take a couple of hours for a call at the New Orleans Cooking School in the French Quarter. And even if your schedule won’t allow it because you’re just too anxious to get to the next treasure, pick up some Creole and Cajun spices to take home.

Dining under the canopy of trees in the outdoor courtyard of theCourt of Two Sisters is sheer magic. Here, guests can embrace the ambiance and the casual elegance of Southern living and the genteel lifestyle. Don’t miss out on the crepes, Bananas Foster, and the mouth-wateringly delicious glazed sweet potatoes. Pat O’Brien’s the home of the Hurricane. It used to be that if you finished one of these potent drinks you got a second one free (more lagniappe). That’s not the case anymore but, since this is a walking tour, it won’t hurt to have another one anyway.

Preservation Hall lives up to its name and keeps the sound as well as the feel of the era of jazz alive. (Videotaping is not allowed, but rolling out did capture a few precious moments on tape).

It would just be wrong to leave New Orleans without enjoying a beignet and a cup of chicory coffee at Café Du Monde. It’s what you’ll need for spending the rest of your day picking up souvenirs at the open-air French Market.

Café Amelie provides much needed rest and respite from the endless activity. Get a cool cocktail and gather your energy for your next destination.

Shopping and perusing artwork at Jackson Square, followed up with a leisurely carriage ride around the Quarter is great for taking your vacation to the next level. End your stay with an exquisite meal at one of New Orleans’ finest. The storied Commander’s Palace has aristocracy all over it, from the family who owns it to the people who patronize it. It is the quintessential upscale dining experience. After this trip — trust and believe — you’ll know what it means to miss New Orleans.