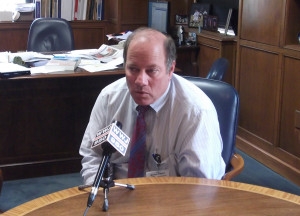 As early as last fall when former DMC head Mike Duggan became more open about his intended run for Detroit Mayor, he started on a major task: to distance himself from current Mayor Dave Bing and Governor Rick Snyder, both of whom are widely unpopular among Detroit voters, polls and pundits and plain old word on the street have shown.

Everything Bing has supported, Duggan has pinned as a bad idea, from the Belle Isle Lease to the proposed lighting authority and the privatization of city services. the consent agreement to claiming in November that Bing and Governor Snyder were going down “the wrong road.” Duggan’s big job over the next few months will be to find ways to be relatable to Detroiters and to unravel the rumors that he is a union buster.

In an interview Monday with Angelo Henderson on WCHB-AM 1200, Duggan continued to distance himself from Bing and disputed the idea that privatization is the answer, something Bing has often turned to in his role as mayor. Over the past three years, Bing has pushed to privatize the  DDOT bus system, the city lighting department, the health department and even trash collection. He has also hired a number of outside firms to perform services that the city offers. Bing has said the city’s last resort is to privatize services and that hiring outside firms is necessary to fix problems within the city.

But Duggan, when asked how he felt about privatization, said it was a result of leadership failure. He told Henderson on Monday:

“Privatization is an admission of management failure. A private company has to make a profit. The government does not. So if government can turn over to the private sector for running it cheaper, the government has to be pretty messed up in the way it was running.”