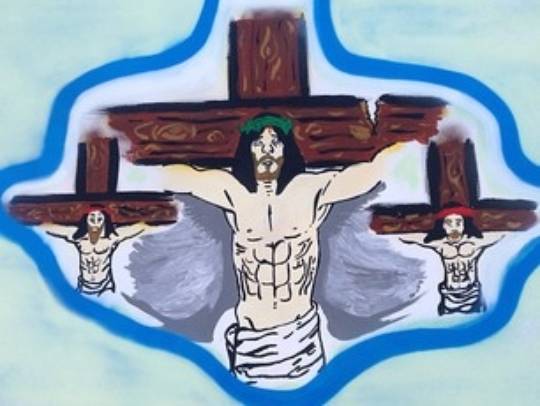 Surprise! Chris Brown is arrogant, narcissistic, self-centered, immature, irresponsible and in general a jerk. And now with his pseudo self-portrait that depicts him as a Jesus like figure, even I have to come to his rescue.  Although his detractors and haters speculate that the painting is more evidence that Brown’s oversized ego and exaggerated image of himself are the primary problem, I believe what Brown is attempting to convey here is the persecution he feels.

On Monday, Jan. 28, Brown posted a photo on Instagram of Jesus on the cross with the caption, “Painting the way I feel today.”

Since the Rihanna beating scandal, Brown has been one of the most hated – although one of the most talented – young artists out there today. The scrutiny has been unrelenting, and even Brown’s brash exterior reveals a crack in the armor.

And now rival singer, Frank Ocean wants Chris Brown prosecuted over a Friday night brawl in a West Los Angeles parking lot. Since Brown is currently serving a five-year probation for assaulting his then (and apparently current girlfriend) the charges could very likely get his probation revoked and find him serving out the remainder of his sentence in jail.

Brown, 23, allegedly punched Ocean, 25, during an altercation and an investigation is underway.

Brown and Ocean are both nominated for Best Urban Contemporary Album at the Grammys, which take place on Feb. 10 in L.A.