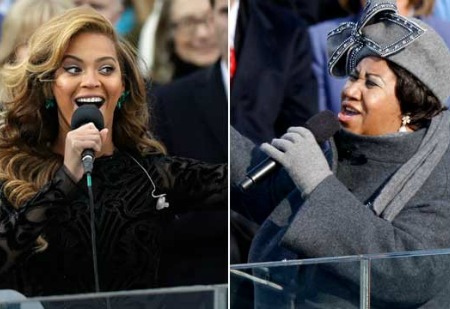 Pop star Beyoncé has been under fire for reportedly lip syncing her acclaimed performance of the Star Spangled Banner at this week’s inauguration of President Barack Obama.

While the “Single Ladies” singer has yet to address the allegations, the Queen of Soul — Aretha Franklin — thinks the whole ‘scandal’ is silly.

“When I heard the news this evening that she was pre-recorded I really laughed,” Franklin said in an interview ABC News. “I thought it was funny because the weather down there was about 46 or 44 degrees and for most singers that is just not good singing weather. When I heard that I just really cracked up. I thought it was really funny, but she did a beautiful job with the pre-record … next time I’ll probably do the same.”

“In 2009, I wanted everything to be live and on the real side for the moment as it actually happened,” Franklin told ABC News. “Those were my feelings for my performance, but having come face to face with 28, 22 degrees I am not surprised she pre-recorded. She wanted her performance to be what she wanted to be and she realized it wasn’t going to be the way she wanted it to be or she was going to be running a risk. That’s probably why she pre-recorded exactly how she wanted it to be heard.”

Claims that Beyoncé used a pre-recorded track originated from the Marine Corps Band, who accompanied the singer’s performance.

Representatives for the band later distanced themselves from these initial reports.