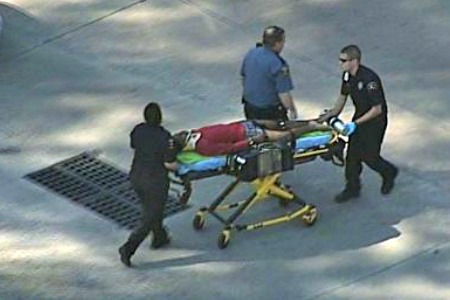 (CNN) — Students ducked under desks and ran for cover during a shooting at a community college in Texas on Tuesday that left three people wounded.

“I just started hearing people shouting and yelling and running,” said Amanda Vasquez, a freshman who was in English class when the shooting erupted at the North Harris campus of Lone Star College in Houston. “I immediately tried to get under the desk, tried to hide …

“I called my mom as soon as I could just because you never know. I didn’t know if this was going to be the last time I was going to be able to speak with her. So I just wanted to make sure she knew that I loved her,” Vasquez told CNN’s AC360°.

Officials from the Harris County Sheriff’s Office are still in the initial stages of their investigation, but here is what they have said so far:

The early-afternoon shooting apparently stemmed from an argument between two men. At least one of the men was armed and at least one had a student ID.

Both were wounded by gunfire and treated at a hospital, where they were detained.

A maintenance worker also was shot. He was struck in the leg and was in stable condition, said Richard Carpenter, chancellor of the Lone Star College System.

The shooting took place outside, between the academic building and the library, he said.

A possible fourth victim, a woman with a student ID who was either at or near the shooting, was treated at a hospital for medical problems. According to a federal law enforcement official who received reports from the scene, the fourth person suffered a heart attack.

Lone Star College student Brittany Mobley told CNN affiliate KHOU that she saw the shooting.
“I saw two dudes basically get into an altercation and … the dude that shot, he basically got angry and, you know, started shooting the other guy,” she said. “A lot of people heard a lot of shots.”

The Lone Star College System is the largest institution of higher education in the Houston area, and the fastest-growing community college system in Texas, according to its website.

There were more than 10,000 students on the campus at the time of the shooting, said Jed Young, a school spokesman. The campus was evacuated and closed for the remainder of Tuesday.

The campus will reopen Wednesday.

Police and emergency responders swarmed an entrance to the campus, aerial video from KPRC showed.
Medical personnel were seen treating at least two people and moving them to ambulances. One person appeared to be handcuffed to a stretcher. Students jogged from some buildings, with their hands up in the air, presumably in response to police instruction.

“I heard no less than five shots, and I just ran,” one student told CNN affiliate KTRK. “My heart was pounding. I was praying I wouldn’t hear anymore shots. I was with a bunch of other people running and someone yelled out, ‘don’t push!’ People were crying, I had tears in my eyes.”

Another witness told KTRK he saw blood on the ground and someone shot in the leg.

“Beside him, there was one guy in handcuffs,” he said.

“I just heard somebody screaming, and then after that, I heard the shots,” another student told KPRC.

The Houston shooting comes roughly a month after the deadly shooting at a Newtown, Connecticut, elementary school that ended with 26 people — including 20 children ages 6 and 7 — dead.

“We know that there is significant national dialogue regarding the frequency, unfortunately, of shootings like this on public school and college campuses,” said Carpenter. “Though we never expected to be a central part of this discussion, we hope that things can be learned from it.”