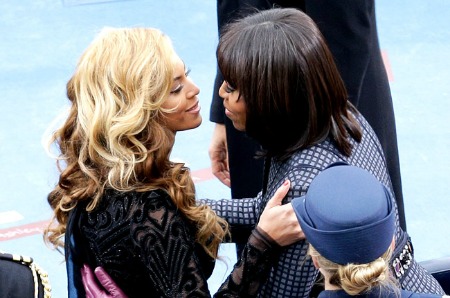 Yesterday’s second swearing in of America’s first black president might have been historical for more reasons than one. It stood as a reminder of how far a group has come since the days of the struggle for civil rights. What better way to commemorate the realization of MLK’s ‘dream’ than with reaching such a historical milestone, and for the second time, at that? It’s easy to get drawn into the context of what that moment represents for Black Americans as whole. However, I’d like to pause to recognize what it means for women of color.

With such few positive images in the media, it is refreshing to witness on a national stage the representation of black femininity at its finest. We have come to recognize them as household names and symbols of beauty, talent, and strength, to name a few. Yet, what it means for little black girls all around the world to witness faces that look like them on such a widely recognized level carries unremarkable significance.

Black women of all generations were represented at the Presidential Inauguration. Michelle Obama stands as symbol of an educated professional who has mastered balancing a marriage, children, and first lady duties with effortless poise and confidence. Her mother, always at her and her daughters’ sides, embodies those qualities just the same. Beyonce, arguably one of the biggest and brightest talents of our time, herself has recently learned a thing or two about multi-tasking with the likes of FLOTUS. They were the standouts of the official ceremony yet so many others illuminate the elegance. Musicians Alicia Keys and Jennifer Hudson who performed during the Inaugural Ball serve as examples of courage, humanity, and humility. What we know about each of these women’s personal lives, as well as professional, carries their story to a new height and even more boldly establishes fondness.

And, let us not neglect to mention the young, beautiful first daughters. What a sight to witness, knowing that so many children are watching. What will it mean that a generation grows up to recognize such images as the norm. Might it be a step in the direction of eliminating prejudices, the objectification of women, and all those nasty ‘social sores’ that are but a reflection of unawareness and a lack of exposure to others?

There will always be negative representations as well as positive ones. No group can escape that fact. Yet, for women of color, that truth has often come hand in hand with few incidences that showcase us in a favorable spotlight. It’s easy to get lost in the mainstream’s fascination with reality stars, video vixens, and oversexualized images of a group rarely celebrated as anything to the contradiction.

What yesterday’s inauguration reminds us of is that it only takes a few to set the standard of excellence. Those exceptions might be rare in nature. Yet, what they speak to the world on a national platform resounds far beyond compare.