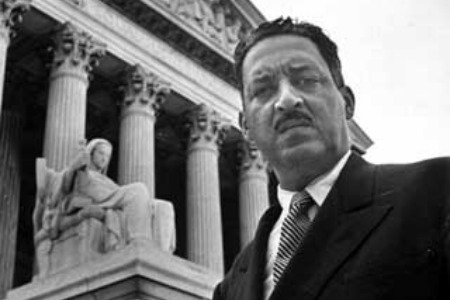 As America officially enters the Obama era with President Barack Obama preparing to take the oath of office Monday on the steps of the U.S. Capitol, laying his hand on the Bibles of President Abraham Lincoln and Dr. Martin Luther King Jr., swearing to defend the Constitution, the buzz among many inaugural attendees is that this is the time for another Justice Thurgood Marshall on the U.S. Supreme Court.

And two names Attorney General Eric Holder and Massachusetts Governor Deval Patrick are been circulated around as individuals who meet the qualification to inherit the legacy of Supreme Court Justice Thurgood Marshall, the first Black to serve on the nation’s highest court.

The legacy of Justice Marshall who was replaced on the court with conservative Justice Clarence Thomas, an African American is one that has far reaching implications given the weight of history and the legendary work of Marshall on civil rights at the height of Jim Crow.

But first that would mean an opening on the court which many observers expect to come soon in the Obama era with the possible retirement of one of the current justices.

“I think President Obama should appoint either Attorney General Holder or Governor Patrick. Either of them would serve with the same type of professionalism, understanding of the law and the sensitivity of what’s happening to people of color in the world at large,” said Jeff Wardford, a business and political analyst attending the inauguration. ” I would probably lean toward Holder because he is probably more aware on the real challenges out there and particularly with the law in his current role as Attorney General.”

Wardford believes that if Obama doesn’t appoint an African American male of the caliber of Holder and Patrick in this era “It would never happen. There is a shift in the country to a more conservative viewpoint and I think that type of momentum will continue.”

“Over the course of history conservative presidents have never had the problem of selecting people to the court that reflect their views and in most cases they were extreme,” Wardford said. “We need another Thurgood Marshall. Now is the time to do so more than ever. And probably the reason being is right now we have a definitive division of class warfare going on in America between rich and poor. The wealthy have their advocates in government and on the Supreme Court which is why we’ve seen laws like eminent domain.”

Reggie Turner, former president of the National Bar Association, the organization of more than 40,000 African American lawyers said both Holder and Patrick would be great choices for the Supreme Court.

“They both have long and distinguished careers in the law and Integrity beyond reproach,” Turner said. ” Their contributions to public service and their private sector contributions give them perspective that will be invaluable to the deliberations of the court.”

Turner said if the opportunity presents itself for either Holder or Patrick to sit on the highest court in the land in the Obama era, “I think the court will benefit from additional diversity both in terms of representing all the talents and skills drawn from the backgrounds of great intellectuals like Holder and Patrick, and from the intellectual force that they will bring to the court.”

If President Obama nominates an African American male with the legal brilliance of Justice Marshall to fill a vacancy on the Supreme Court, it will be a major coup for the continued battle for civil and human rights.

Because Marshall stands out as one of the greatest legal minds of the 20th century who helped to end legal segregation in America during his victory in the Brown v. Board of Education case.

Justice Marshall, who served on the Supreme Court from 1967-1991 after he was nominated by President Lyndon Johnson, championed the rights for every individual including minorities and the disenfranchised.

Bankole Thompson is a Senior Author-in-Residence at Global Mark Makers Publishing House in Iowa where he is writing a groundbreaking six-part book series on the Obama presidency. His book “Obama and Black Loyalty” published in 2010 follows his recent book “Obama and Christian Loyalty” with a foreword by Bob Weiner former White House spokesman. His forthcoming books in 2012 are “Obama and Jewish Loyalty” and “Obama and Business Loyalty.” He is the first editor of a major African American newspaper to have a series of sit-down interviews with Barack Obama. Thompson is also a Senior Political News Analyst at WDET-101.9FM Detroit (NPR Affiliate) and a member of the weekly “Obama Watch” Sunday evening round table on WLIB-1190AM New York and simulcast in New Jersey and Connecticut.