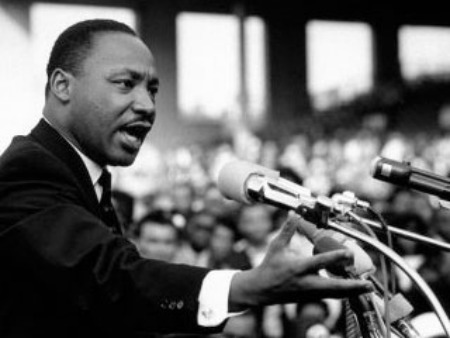 It may be simply a strong coincidence that today marks the second official inauguration of America’s first black President Barack Obama. Nevertheless, people across the country, African Americans and others, are pausing to reflect on the contributions made by Dr. Martin Luther King Jr. in the struggle for equality. Taking the matter a step further, one cannot help but to marvel at all that has since been accomplished.

Most Americans know the story. We have heard the accounts and seen the photos from a devastatingly dark time in American history. A time when blacks were treated as second class citizens and denied most of the rights so easily taken for granted in this day and age. Perhaps even more shocking that the historical footage is that this was not long ago. Countless names emerged as symbols in the fight for justice; yet, it is inarguably evident that MLK’s prominence surpasses most as the key figure of the Civil Rights Movement.

Dr. King’s legacy is beyond measure. Living in a world that has over-saturated us with certain names from history, it is possible that in our routine observance, we neglect to completely and accurately wrap our heads around his enormity. Can we ever truly understand the relevance of what persons like MLK did? Not even fifty years after blacks fought to protect their voting rights, our country has a two-term president of African descent.

It would be easy for present day America to pat itself on the back for a job well done on the race for equality. The truth, however, is that certain persons paved the way toward this progress. They set the trend to be followed. One cannot help but imagine how things would be had they not done the work that they did. Granted, just as far as we have come we may have to go. Nevertheless, the strides made since the days of the civil rights struggle cannot be denied.

Many people across the nation will in some way commemorate MLK on this historical day. Whether it be through special activities and events, or simply witnessing President Barack Obama be sworn in for a second time as the leader of the ‘free world’. There isn’t much need for a party. The evolution of our current world is itself a celebration of the ‘dream’ MLK envisioned when he stood at the Lincoln Memorial and spoke in 1963. Dr. King himself may not have understood the relevance of this vision; yet, today, we are reflections of it in the flesh.