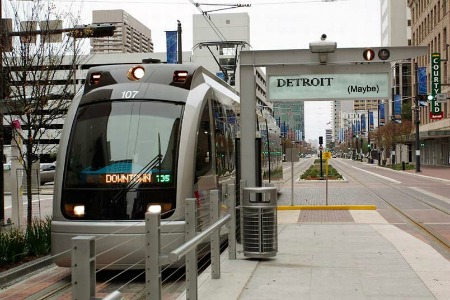 “This is a great example of relentless positive action,” Snyder said during the announcement at Wayne State University. “After more than 40 years and 23 failed attempts to establish a regional transit authority, I am pleased that we can move forward with our local and federal partners to implement an efficient, effective transportation system for over 4 million Michiganders. This new economic engine will produce thousands of jobs for workers, expand the talent pool for employers and create a broader retail market for small businesses in the region. Secretary LaHood’s commitment to these efforts has been vital and we thank him for such strong support.”

“I applaud Michigan’s leaders for coming together to support a regional vision for public transportation that will improve access to jobs, education, medical care and other destinations for residents in the Detroit metro area,” LaHood said. “The Obama administration is committed to the creation of a modern transportation system that will create jobs Detroit needs right now, while spurring new economic development to help this region grow stronger in the years to come.”

A $6.5 million planning grant will provide funding for the Regional Transit Authority to develop a bus rapid transit system that serves four counties and Detroit. On Wednesday, the governor announced that veteran lawmaker Paul Hillegonds, currently the senior vice president of corporate affairs for DTE Energy, will serve as chairman of the authority. Specifically, the dollars will fund alternative analyses and environmental studies on Gratiot and Michigan avenues as well as a cross-country route through northern Oakland and Macomb counties. The Southeast Michigan Council of Governments estimates that building and operating the bus rapid transit system will generate more than 5,400 jobs in the region.

In addition, creation of the Regional Transit Authority paved the way for a $25 million TIGER grant for the M-1 RAIL consortium to build and operate a 3.3 mile streetcar system along Woodward Avenue from downtown Detroit to the New Center area.

Snyder thanked the consortium for five years of unflagging commitment to the project.

“This effort demonstrates the value of public-private partnerships and their ability to help achieve success for our communities,” Snyder said.

The public-private partnership is backed by several community leaders, including Roger Penske, Mike Ilitch, Dan Gilbert and Matt Cullen. The Kresge Foundation has donated $35 million and other foundations, corporations, educational and health care institutions have contributed significant amounts to finance the $137 million investment, along with the TIGER grant and earnings from New Market Tax Credits.

Construction of the Woodward streetcar system will begin this summer and is expected to employ more than 2,000 workers during the project. The streetcar system will have 11 stops along its 3.3 mile stretch. Streetcars will feature level boarding for handicapped and seniors users, quiet electric power, off-board ticketing and on-board Wi-Fi service.