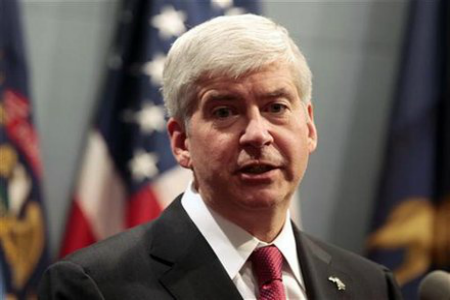 A recent poll found that while Michigan’s new right-to-work laws are divisive, with 50 percent of the state’s respondents supporting and 45 percent opposing legislation that unions say weakens their powers, they have had little effect on Governor Rick Snyder’s overall approval rating.

The poll, conducted by Republican polling firm Mitchell Research & Communications, also found 50 percent of the 600 likely voters sampled approve of Governor Rick Snyder, who signed the RTW legislation in December after previously insisting he didn’t want to pursue it. The poll found 43 percent do not approve of the job Snyder is doing.

The pollsters conducted a similar poll in December before right-to-work legislation was signed. In comparison, Snyder’s job approval is up 3 percent in the recent poll, but his disapproval numbers have also risen by 8 percent. Right to work support has stayed the same and opposition has risen 6 percent.

“Clearly, the ugly battle over R-t-W has not hurt the governor,” Steve Mitchell, Mitchell president, said in a statement. “Given all the controversial legislation passed over the past two years, Governor Snyder is in very strong shape going into the last two years of his first term.”

The factions against RTW would likely disagree. A group plans to protest Wednesday evening at the Capitol as Snyder gives his State of the State address. In recent weeks, Democrats have launched several public campaigns slamming Snyder. The right-to-work laws, which go into effect in March, are likely to be challenged in court.

The Detroit Free Press points to the variation in Mitchell poll’s, when it’s compared to one released by North Carolina Democratic pollsters Public Policy Polling a week after Snyder signed right-to-work laws. The PPP poll, which sampled 650 voters, found 41 percent support for RTW and 38 percent approval of Snyder.

“Now that things have calmed down in Lansing and the holidays have passed, public opinion has stabilized and the Governor and R-t-W legislation have a majority of the voters supporting them,” said Mitchell.

The State of the State address will be streaming live here and on HuffPost Detroit.

The Mitchell poll conducted by live telephone operators between Jan. 7 and 10, 2013, sampled 600 likely voters in the November 2012 election and had a margin of error of plus or minus 4 percentage points. Of the respondents, 42 percent identified as Democrats and 34 percent as Republicans. The questions were commissioned by by MIRS (the Michigan Information and Research Service). Their December poll was funded by right to work supporters, according to the Detroit News.