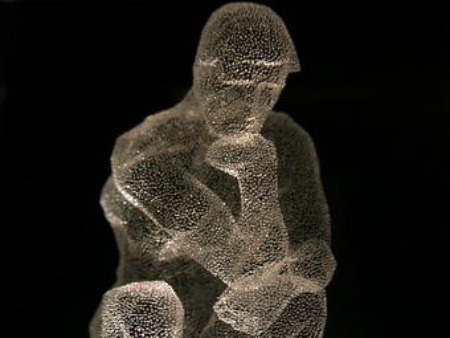 On Monday, a hologram of the father of electricity, Thomas Edison made its debut at the 2013 North American International Auto Show in Detroit. This latest innovation is a prime example of modern technology’s most recent developments.

What might surprise you is that holograms exist all around us in places we tend to take for granted. They’re in our wallets, on credit cards, and within the discs we watch and listen to. Movies and television have already jumped on board, and some of the largest communications companies are considering turning your cell phone into a third dimensional device. 3-D is beginning to take on a ‘life’ of its own, literally.

One cannot help but to witness such novelty and wonder what it means for the future of technological evolution. For some, the question of ethics enters a discussion involving images that so closely resemble real human beings. This latest milestone in technology is remarkable and at times, somewhat creepy to witness ‘up close and personal’.

While no life can ever be duplicated, holographic images come about as close as possible to replicating its physical form. The possibility of figuratively reincarnating historical figures, celebrities, and even our loved ones is shocking yet brilliant.

A question on the minds of many is ‘who will next be made into a technological replica of real life?’ Imagine holding a virtual conversation with someone from the past, one who might have died long ago before you existed. What would you ask, and how would that person answer? Can a computer so accurately mimic the human brain? Judging recent creations like Apple’s Siri, technology is coming closer and closer to such a feat.

Remember watching The Jetson’s show as a child? Soon, mechanical maid Rosey might be a member of the family who looks more like a human being than a robot.

Let’s not jump too far ahead, though. Albeit, the promising trajectory of our era’s technology is sure to have our eyes widening as we marvel at its accomplishments. As time progresses, the computer age will continue to tread the thin line between ‘real’ and ‘realistic’. Holograms are sure to become a household topic in the near future. What’s next in the world of technology?