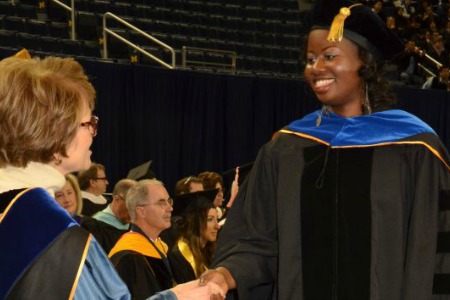 “Am I really the first?”

That was the first thought that came to mind when Kyla McMullen, 27, found out she would soon become University of Michigan’s first African-American female computer science PhD alumna this past year.

McMullen later decided to go to the records office to search for another fellow black female alumnus to connect with. But she soon discovered that she was the only black female student in the history of the program.

“Typically when you think of someone who is in computer science. you think of a person who is a geek – with pocket protectors, suspenders and highlighter pants,” McMullen joked in a phone interview with theGrio. “African-American women often don’t’ think ‘Okay, I wanna be that [nerd].’”

While McMullen’s graduation this past spring marked a racial landmark for Michigan’s computer science department, she said that her experience in the department was sometimes “isolating” because she had very few people to turn to for mentorship.

“If you’re a black woman who’s interested [in computer science], you think you’re going to be the only person that looks like you,” McMullen said. “Everyone knows Bill Gates or Steve Jobs, but there is really no one famous that is African-American. The lack of role models or even the lack of someone who looks like you is one huge factor that influences why black women don’t pursue computer science.”

McMullen admits she did face some obstacles during the process of obtaining her graduate degree. She remembers during her first semester, the graduate student liaison told her, “I’ve never taught one of ‘you’ before.” McMullen never understood why the liaison called her ‘one of you’ but she quickly brushed off that awkward experience.

It wasn’t until her second year at graduate school, where she really felt discrimination.

“My adviser told me, ‘Not everyone is cut out to study computer science. Have you tried any other careers?’ He said I didn’t have what it took to study computer science,” she said. “That was the only time someone blatantly said to me to my face that I couldn’t do something. I can’t assign a reason why he said that, but I’m pretty sure it’s because of the way of I looked… I was really taken back of how dismissive he was about me.”

But despite some minor roadblocks, the 27-year old has been able to fulfill one of her lifelong dreams to walk the stage to receive her graduate degree in computer science this past spring.