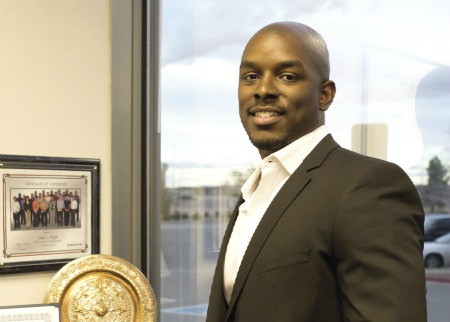 For most Detroiters, cars are like clothing. Life would go on without them, but it wouldn’t be the same. The city has carried on a 125-year love affair with the automobile.

“Driving is what we do,” said Gloria Usher, a government worker from Detroit. “When I look back on it, how I started driving, at such a young age mind you…what cars have meant to me, my father and my brothers. Cars are so important to who we are as Detroiters.”

For most people driving has been a love-hate relationship — traffic jams, accidents, noise — but overall, it has been an enduring and fascinating one. Growing up in the automobile capital of the world has its privileges.

“The only way to describe cars…is beautiful,” said Cam Collins. “Just the mere fact that so many things come together to make an automobile functional and then to get behind the wheel of a car and feel its power, is unbelievable. I think we take it for granted. “

On January 16, 2013, the North American International Auto Show and the city of Detroit will host a plethora of events surrounding a group of people who have made the relationship with automobiles possible.

One event in particular, DRIVEN, honors African Americans who have not only withstood the onslaught of the recession and the automobile industry’s restructuring, but have thrived despite it.

In the 1880s, the continental United States wasn’t even united. California, Oregon, and Nevada were states, but separated from their eastern counterparts by nine territories that would ultimately become 10 states.

There were not yet cars, but the Industrial Revolution was well under way. The country had more than 160,000 miles of railroad tracks by 1890. That is almost four times the length of today’s Interstate highway system. But if you wanted to travel where you wanted and when you wanted, you were relegated to the horse, or the mule.

Conventional 19th century wisdom held that a man on horseback could cover about 20 miles a day without harming his mount. If you lived in rural America, you were unlikely to see much of the country that lay beyond your horse’s range in your lifetime. And such things as emergency medical service, pizza delivery and the Roto-Rooter Man were not even dreams. The automobile proved to be the device that freed every American of geography and the loneliness of isolation.

“I wouldn’t know what to do if I couldn’t drive,” said Joe Meade. “I think I have been driving since I was at least 12. For most of us here in Detroit…it’s such an important part of our makeup. Driving is a part of our culture. All of us remember the first time we got behind the wheel of a car. You had died and gone to heaven.”

The average American knows that Henry Ford invented the Model T, that there was a song involving Lucille and an Oldsmobile, that tires lasted about two hours, and that you risked being considered foolish if you drove a “horseless carriage.”

The generally accepted birth year of the car is 1885, the year Benz actually built his first gasoline-powered three-wheeler, which means that this is either the 126th or 127th anniversary of the car. And more than 100,000 patents ultimately contributed to the creation of what we know as the automobile.

In 1900, in Europe, Ferdinand Porsche, in addition to insisting that his name be pronounced POR-shuh and not Porsche, produced a remarkable automobile. It was battery powered with four electric motors, one at each wheel.

Sound familiar? It should, because it was essentially a hybrid, and it happened 111 years ago.

In Michigan, which would become the seat of the American car industry, Ransom E. Olds expanded on mass production of the automobile. He, not Henry Ford, established the first true assembly line and used it to build a tiller-steered car known as the “curved dash” Oldsmobile. By 1902 he was pumping 2,500 cars out the door, and this rose to 5,000 Oldsmobiles by 1904. To put these sales in perspective, Benz sold 572 vehicles in 1899.

This set the stage for Henry Ford and his refined and expanded assembly line. Ford’s first automobile was not the Model T, but the Quadricycle, an open, gasoline-fueled, four-wheel, tiller-steered contraption with a seating capacity of two.

On June 4, 1896, when he was ready to test his creation, which he built in a shed behind his home on Bagley Avenue in Detroit, Ford had to remove a wall because the Quadricycle would not fit through the doors. The good news was that the Quadricycle worked and led to the formation of the Henry Ford Company and later the Ford Motor Company.

In 1908 Ford brought out the Model T, the car that would put America on wheels. It cost $850 and sold 10,000 units in its first year. Four years later, Ford reduced the price to $575. By 1916 some 55 percent of the world’s automobiles were Model Ts, a record that was never equaled. By the time Model T production ceased in 1927, more than 15 million of the cars had been sold. Amazingly, an astonishing number of Model Ts are still with us, and there would be more had World War II scrap drives not consumed thousands of them.

Cars today are better than anyone ever thought they could be. Diesels don’t rattle or smell anymore. Onboard GPS systems can help you find a hotel or a Starbucks when you’re traveling. Cars are safer and sounder — and they last for years.

The U.S. industry produced the first minivan in 1983, and not long after, the SUV became the thing for moms and dads to drive because kids didn’t want to be seen in a minivan. The station wagon reappeared in the 1990s, but is now called a crossover. The hybrid is back, and so is the electric car.

The love affair between Americans and their cars has lasted for more than a century. Like most affairs of the heart, those years have produced triumph, tragedy, creativity, innovation, and a substantial dose of laughter and lunacy.

This is likely to continue.

“When I moved here from Grand Rapids, it amazed me that people would get in their car to go two blocks to the grocery store,” said Debra Usher. “I found it ridiculous. But that’s Detroit.”

Next week: How the DRIVEN event went from an idea to a reality.