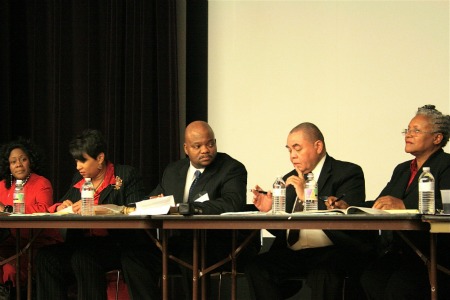 Detroit School Board President LaMar Lemmons said the board is prepared to “pull the trigger” on a judge’s ruling that could unseat all school board members that were elected by district.

Michigan Attorney General Bill Schuette on Thursday asked Wayne Circuit Judge John Gillis, Jr. to speed up a decision on whether seven members of the Detroit Board of Education are holding office illegally. The ruling, which is expected to be delivered by mail, could come down as soon as today.

Schuette filed the lawsuit in August citing a state law that requires school districts with less than 100,000 full-time students to elect all of its school board members at large. Schuette asserts that DPS enrollment numbers dipped below 100,000 prior to the board’s 2011 election.

The state’s chief law enforcer has argued that the seven Detroit school board members elected by districts in 2011 are holding office illegally.

But Lemmons says the board is prepared to fight Gillis’ ruling should he call for the removal of his district-elected colleagues.

“The ACLU has already said that they will join in the fight and we have already retained counsel,” Lemons told MiChronicle.com. “Everything’s all set. We’re ready to pull the trigger.”

This lawsuit is one of many that has been flung between board members and state officials in recent years as battles for control of district functions have flared since the state appointed an emergency financial manger (EFM) to take over district’s beleaguered finances in 2009.

In 2011 the district saw the brief tenure of a controversial emergency manager law, Public Act 4, that gave an emergency manager total control of troubled school districts, including academics, an area that the school board retained control of prior to the sweeping 2011 legislation.

Since Public Act 4 was overturned in November, and its predecessor, Public Act 72 is back in affect, School Board members say EFM Roy Roberts has not honored the voter’s decision to strike down PA4 and return academic decisions to the board.

Meanwhile, state legislature drafted up and passed a new law, Public Act 436, one that will take affect in late March.

“In the interim we are, in theory, in charge of academics of the district but in reality we have not had control,” Lemmons said.

But he said the board has studied the new emergency manager law and found a promising loophole.

“The elephant is the room is that the legislation neglected to see that we will be grandfathered into 436,” he said of the new legislation. “Public Act 436 states that after 18 months, a two-thirds vote [from the board] can remove an emergency manager. We have had an emergency manager for 50 months by now,” Lemmons said. “I don’t have to tell you that we are going to ask to remove the emergency manger.”

To prevent such legal backlash, Schuette has sought an injunction against the four at-large board members to silence them should Gillis decide to unseat seven district-board members according to The Detroit News.

Lemmons said he is committed to continue the fight for control of the DPS. “This is an attempt to destroy the will of the people,” Lemmons said, noting that the board will be in Court on Wednesday to hear a ruling on whether the Education Achievement Authority, the State-run school district aimed turnaround the state’s worst performing schools, should be dissolved.

The board will also heard from Wayne Circuit Court Judge Annette Berry as to whether the school board can hire a number of new staffers.

The board voted to hire two ombudsman positions and one assistant to the interim superintendent, both with annual salaries exceeding $100,000. Roberts said.

In a letter, Roberts said he recently became aware of several hiring decisions by the board.

“At no point in time did the Board seek my approval in accordance with Public Act 72,” Roberts wrote in the letter. “In fact, no one has even attempted to discuss with me the financial impact the salaries and ancillary costs for these new positions will have on the district’s tenuous budget.”