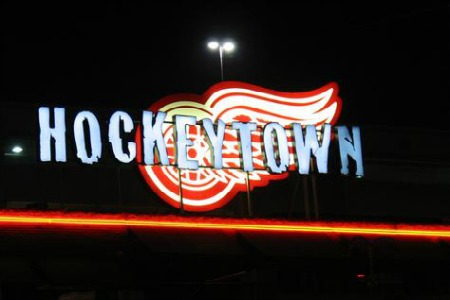 After 113 days, the NHL lockout has come to an end. Which means Detroit is officially “Hockey Town” again!

There has been missed money for guys like Jonathan Ericsson, who was supposed to earn $3.25 million this season while playing on a Detroit Red Wings’ blueline. And let’s not forget the business community who profits immensely from Hockey season in Detroit.

“I’m really bored,” Ericsson said to the Bleacher Report back in December 2012. “It gets old. You don’t even know why you’re on the ice, why you’re waking up. Am I doing this for a reason? The motivation goes up and down.”

Well now all of that practice will not have been for naught…as the NHL Players Association and the league reached a tentative settlement early Sunday after a marathon overnight bargaining session. The 10-year deal paves the way for an abbreviated 2012-13 season. The tentative collective bargaining agreement still has to be approved by the NHL Board of Governors and the players association.

With the 10 year agreement, the owners have an opportunity to opt-out after eight years, which ensures a long period of peace. The NHL has endured three lockouts in the past 20 years.

The salary cap for next season – the first full season under the new CBA – will be closer to the $64.3 million it was in 2011-12 than the $60 million the league had wanted. And player contracts – a sticking point for both sides – was settled at seven-year maximum deals, and eight years for players who re-signed with their own teams. Salary variance cannot vary more than 35%. Presently, the Wings’ payroll stands at $61.4 million, which gives them an enormous amount of flexibility.

In the meantime, a handful of Detroit Red Wings have been going about business as usual. They took it upon themselves to have self-run practices at Troy Sports Center, during the 113-day NHL lockout. The Joe Louis Arena, meanwhile, has been rented out by Ford in advance of the North American International Auto Show. It is expected to be available before Jan. 17.

After three months of waiting and wondering, players will finally get started on a much anticipated season. Dates for training camp and the start of a 48-to-50-game schedule won’t be released by the NHL until later this week.

“When you’re in it every day you sometimes start taking things for granted and then when it’s taken away from you, you really appreciate it,” Detroit Red Wings coach Mike Babcock said to the Columbus Post-Dispatch. “I’m so excited to get back.”