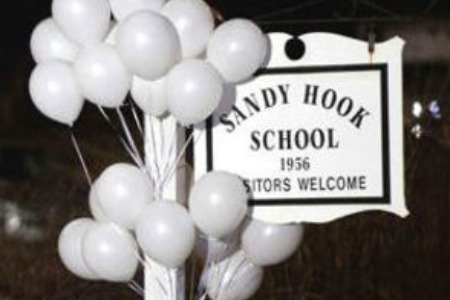 (CNN) — For the first time since the massacre at Sandy Hook Elementary School, Christine Wilford plans do something remarkable on Thursday that once was routine: drop her child off at school.

The last time her 7-year-old son, Richie, was in class was on December 14, when a gunman smashed his way into his school in Newtown, Connecticut, and killed 26 children and adults.

As shots rang out, Richie’s teacher locked the door and huddled her students into the corner as the shooter roamed the hallways, wielding an AR-15 assault rifle and firing.

When it appeared safe, the children were then hurried away to a nearby fire station, where teary parents either reunited with their sons and daughters or learned that they had been killed.

Principal’s daughter: She’ll be with them Source says Lanza cut dad out of his life Sandy Hook: Obama’s worst day

Nearly a month later, Wilford said her son still has trouble sleeping and is often scared by loud noises.

But on Thursday, he will join hundreds of other Newtown students returning to class for the first time since the tragedy.

“We think it’s good he’s going back,” Wilford said. “If I leave my child anywhere, I’m leaving a piece of my heart, so it’s difficult to leave him.”

But Richie apparently isn’t afraid and says he’s looking forward to seeing his friends, she said.

They won’t be attending Sandy Hook Elementary, which police say remains part of an ongoing investigation into Adam Lanza, the gunman who also killed his mother before opening fire at the school.

Instead, Richie and his classmates are expected to travel to Chalk Hill Middle School in the nearby town of Monroe, where a green-and-white banner greeting the children hangs on a fence.

Newtown Public Schools Superintendent Janet Robinson said that part of the building had been transformed to resemble an elementary school.

“(We want) to have as much (of) a normal routine as possible,” she said. “(Thursday) is a regular schedule, and we will do the kinds of things that we know are good for kids.”

The school has also been outfitted with rugs and furniture similar to those at Sandy Hook to help ease the transition for students. Even the school’s pet turtle was relocated, Robinson said.

Security measures have also been increased, with a new system incorporating more cameras and locks, according to Jim Agostine, superintendent of Monroe Public Schools.

“I think right now it has to be the safest school in America,” Monroe Police Lt. Keith White said.