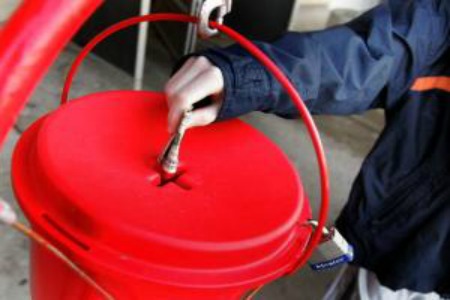 SOUTHFIELD (WWJ) – The city of Detroit is turning red to raise awareness of the final days metro Detroiters can donate to The Salvation Army’s 2012 Red Kettle Campaign, which ends when red kettles leave storefronts across metro Detroit on Christmas Eve.

“We invite everyone to rally together with us to Paint the City Red in support of our 2012 Red Kettle mission,” Major Mark Anderson said in a statement. “This is the home stretch of our campaign and we’re relying on the community to help us reach our $8.5 million goal.”

On Friday, Dec. 21, others in Detroit will join the Paint the City Red campaign, such as:

• The Compuware and Chase Buildings will join the Renaissance Center in sporting a rosy glow.

• Bell ringers will man red kettles throughout the workday at the Griswold Street entrance of the historic Guardian Building in the heart of downtown Detroit’s central business district.

The centerpiece of the Paint the City Red observance is a lunchtime celebration in Campus Martius Park from 11 a.m. to 1:30 p.m. Friday. The celebration will include a bell-ringing competition, a variety of food trucks, appearances by the Detroit Tigers’ mascot Paws and the Detroit Lions’ mascot Roary, appearances by cast members of “Jersey Boys,” and a live performance by The Salvation Army Brass Band.

In addition, the Campus Martius Park ice rink will be hopping from noon to 1 p.m. for open skating.

To make a tax-deductible contribution to The Salvation Army Red Kettle Campaign:

• Drop a donation into one of nearly 450 red kettles at storefronts across metro Detroit through Dec. 24, or Christmas week at area Kroger and Busch Fresh Food Market locations, which will continue hosting red kettles through Dec. 29.