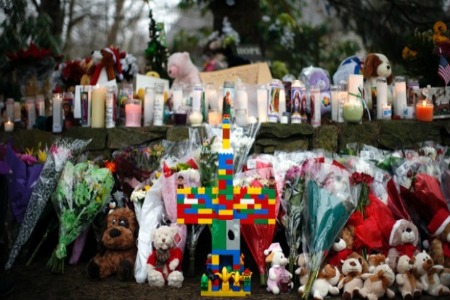 (CNN) — Across the nation Friday morning, church bells will toll. Flags will fly at half-staff. Many websites will go silent. And office workers and homemakers, students and nursing home residents, Americans in at least 29 states will stop whatever they’re doing to remember the lives snatched when a gunman burst into a Connecticut elementary school exactly a week ago and rained hell.

Alaska, Massachusetts and South Carolina are among states that have declared a moment of silence for 9:30 a.m., marking the hour one week ago that the gunman forced his way into Sandy Hook Elementary School and shot 20 students, six adults then himself dead in Newtown.

Adam Lanza had killed his mother before arriving at the school.

A little over an hour later, one group that has kept mum through all the calls for gun control will break its silence: the National Rifle Association.

The NRA news conference with executive director Wayne LaPierre will begin at 10:45 a.m.

But late Tuesday, the group broke that silence with a statement:

“The National Rifle Association of America is made up of four million moms and dads, sons and daughters — and we were shocked, saddened and heartbroken by the news of the horrific and senseless murders in Newtown. … The NRA is prepared to offer meaningful contributions to help make sure this never happens again,” the group said. Both its Facebook and Twitter presences became active again.

Despite the relative silence early on from the powerful lobbying group’s offices in Fairfax, Virginia, the organization is regrouping in anticipation of a massive legislative push for gun control legislation, a gun policy expert said.

Kristin Goss, an associate professor of public policy and political science at Duke University and author of “Disarmed: The Missing Movement for Gun Control in America,” said that strategy is part of the organization’s playbook after an incident such as this one.

After such a terrifying event, when there is a national outcry, the NRA typically lays low, Goss said.

“They’re used to seeing this cycle, express condolences and hope the attention will shift to a new issue.”