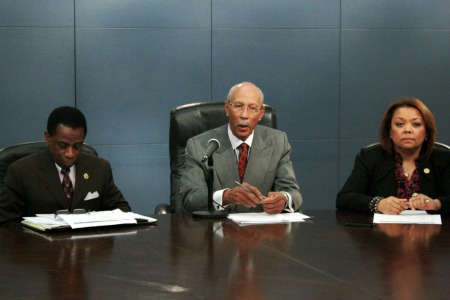 The “revenue enhancement initiative” calls for amnesty on delinquent taxes and fines paid in full during a 30-day window for each amnesty program. Unpaid balances will be referred to an outside collection agency with penalties.

“There are a lot of people who think we haven’t done anything, that we’re just sitting around twiddling our thumbs but we’ve already collected over $11 million year to date and I think we’re going to reach that dollar amount of $50 million,” Bing said.

Martin said the city would likely save more than the estimated amount.

“These are conservative estimates. We hope that we will do much better than we are projecting in thee charts,” Martin said.

Officials estimated the city would collect nearly than 20 million in delinquent property and income taxes, parking judgments, miscellaneous receivables and other debts through “aggressive collections.”

The City plans to collect another $7.2 million through asset sales.

“We are currently negotiating to sell the Veteran Memorial building,” Martin said. “We are in process of identifying … other property that will be sold to raise additional revenue.”

Bing vowed to go after all of the city’s debtors no matter what their background.

“It doesn’t matter about the politics for me. If you owe the money we expect you to pay it or we’ll come after you,” Bing said. “We want to be right and our responsibility from this administration is to make the hard choices and do what’s right for the city of Detroit.”

Another $10 million is expected to be saved though 500 layoffs in the coming year. While Bing said he hoped to be able to spare public safety jobs, no city department of off limits.

“It’s across the board, nobody is exempt at this point,” Bing said.

Martin noted that much of the layoffs will “occur through retirement and other attrition.”

The ten-point revenue plan comes days after State officials implemented a panel to review the city finances. The result of the State’s fiscal review could lead to the appointment of an emergency financial manager to take over city finances under Public Act 72.

Bing said Wednesday’s announcement was not in response to the state finance review.

“I think there’s way too much attention given to what we’re trying to do to stave off a financial manager,” He said “I doubt somebody else could come in and do a better job than we.”

The city savings plan is the first in what could be a series of cost saving and collection measures, according to officials. The city’s financial crisis is nothing new, Bing said. The current debt collection process uses archived data to cash in on long-owed bills, some dating decades back.

“I said from day one that the city is in crisis. It hasn’t changed. What we’ve had to do is go in and build a foundation and that’s not an easy thing to do when you’re going back 15, 20 years,” Bind told reporters on Wednesday. “This is the first phase. We may go five, ten different phases as we continue to peel back the onion.