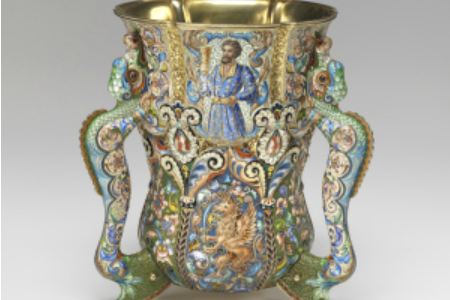 DETROIT (WWJ) – More than 200 precious objects made under the direction of Karl Fabergé provide a glimpse into a bygone era of Russian imperial glory in the exhibition Fabergé: The Rise and Fall, on view at the Detroit Institute of Arts through Jan. 21, 2013.

In addition to the array of stunning artworks, the exhibition explores Fabergé’s rise to international fame and the eventual demise of his designer brand, House of Fabergé.

For more than 40 years, the House of Fabergé, led by Karl Fabergé, produced world-renowned luxury objects during one of the most decadent and turbulent eras in modern Russian history. At the height of its success, the company employed more than 1,500 craftsmen and was selling today’s equivalent of $175 million worth of goods per year. The exhibition traces the story of Fabergé’s business savvy, artistic innovations and privileged relationship with the Russian aristocracy, especially the Romanov imperial family.

“Visitors will certainly be fascinated by the quality, craftsmanship and sheer beauty of these exquisite objects,” Graham W. J. Beal, DIA director, said in a release. “Their opulence is a reflection of the lifestyles of the people for whom they were created, and while it’s tempting to just present an exhibition of ‘pretty things,’ we also provide a look at the House of Fabergé’s rise to prominence and how social and political factors led to its downfall.”

Visitors will have the rare opportunity to view imperial Russian treasures, including jewel-encrusted parasol handles, an array of enameled frames, a menagerie of animals carved from semi-precious stones, and one-of-a-kind miniature egg pendants. The DIA is privileged to showcase six imperial Easter eggs, of which only 50 survive. Highlights include the Imperial Tsesarevich Egg (1912) and the Peter the Great Egg (1903). These eggs continue to capture popular imagination, both as relics of aristocratic excess and pinnacles of artistic ingenuity.

The DIA’s display will be complemented by thought-provoking text, large-scale photo murals and hands-on activities to help visitors imagine the ways in which such luxury objects would have been hand-crafted in a workshop, viewed in a storefront and used to adorn the interior of the imperial palace. The museum will feature a variety of public programs from lectures and artist demonstrations to rare silent films accompanied by live music.

The exhibition is organized by the Virginia Museum of Fine Arts, in collaboration with the Detroit Institute of Arts. Educational programming is provided by the GM Foundation.

Tickets to view the special exhibit are required on top of museum admission. Tickets for the exhibit are $15 for adults, $8 for children, $12 per person for groups of 15+, and free for DIA members. Tickets are timed and advance purchase is recommended. Final entry is one hour prior to closing.