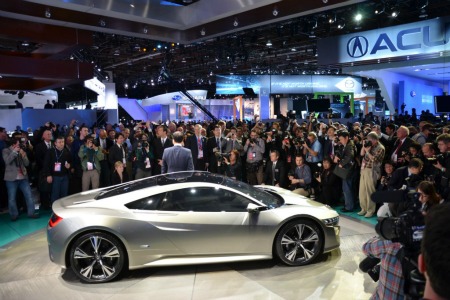 DETROIT –(WWJ) A quick stroll through the construction site that Cobo Center has become shows that change is coming to the North American International Auto Show.

Even as the exhibits are taking shape, you can see that many have been updated, and some have been moved.

Show Vice Chair Bob Shuman says Toyota has decided to move into the new space, that was taken up by suppliers and non auto companies last year.

“They promised to really do some things to draw people in there,” he said. “They are going to give it a try this year.”

Among the other big changes, Cadillac has moved away from the other GM brands. Its new stand will be located near the German luxury brands, which Cadillac now sees as its main competitors. Cadillac will show the new ELR extended range electric car at the January show.

Nissan, which dropped out of this show a few years ago, is now planning a new, more elaborate display.

With car sales on the rise, show organizers say car companies no longer feel like holding back.

“Like our auto manufacturer partners, we continue to look for ways to improve our product, and our customer service,” said Jim Seavitt, NAIAS 2013 chairman. “And, as we present the industry’s finest on the world stage, it’s our goal to exceed the needs of media and manufacturers, alike. We take our leadership position very seriously, and work year-round to maintain that distinction.”

Cobo Center is still in the midst of an expansion and upgrade. While the transformation of the former Cobo Arena into a ballroom-type space won’t be finished for another year, the new Riverfront Atrium is expected to be done in time for time for the 2013 show. It will be used as a gathering place, and will have a temporary stage put up for opening ceremonies, and the presentation of the North American Car and Truck of the Year.

After the difficult years of 2008 and 2009, Vice Chair Bob Shuman says the North American International Auto Show has returned to prominence among the major shows.

“One German manufacturer had said, they had studied 18 of the international shows, and we were number one—by far—in terms of bang for the buck.”