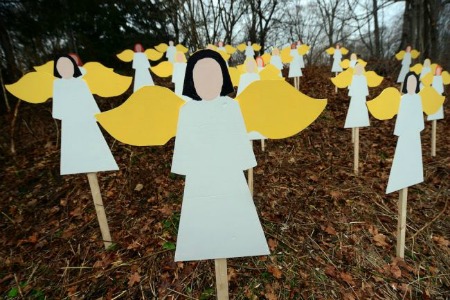 (CNN) — Across this devastated town, students returned to schools Tuesday, marking the beginning of a new reality.

With their sense of normalcy shattered following last week’s massacre at Sandy Hook Elementary, students at other schools are seeing more police and counselors on hand. And teachers who face a new, tremendous burden.

Classes will discuss the tragedy in an age appropriate manner, the teachers’ union said.

But the young children of Sandy Hook aren’t going back to school yet.
Their school is a crime scene, the site where 20 kids and six faculty members were slaughtered.

It’s not clear when they’ll resume classes. But when they do it’ll be at a different school in neighboring Monroe, Connecticut.

More details about the gunman who turned their schoolday into carnage are slowly emerging. And under the cloud of national mourning, a renewed debate about gun control is heating up.

Richard Novia said Lanza had Asperger’s syndrome, based on documents as well as conversations with Lanza’s mother, who was killed shortly before the Sandy Hook massacre.

Novia said as part of his job, which he left in 2008, he would be informed of students who might pose problems to themselves or others.

He also said he received “intake information” — which he said “is common for any students troubled or impaired or with disabilities.” The idea was to keep track of and help students who may need it.

After shooting, cops take no-tolerance approach to copycat threats
Russ Hanoman, a friend of Lanza’s mother, previously told CNN that Lanza had Asperger’s syndrome and that he was “very withdrawn emotionally.”

But CNN has not been able to independently confirm whether Lanza was diagnosed with autism or Asperger’s syndrome, a higher-functioning form of autism. Both are developmental disorders, not mental illnesses.

Many experts say neither Asperger’s nor autism can be blamed for the rampage.

“There is absolutely no evidence or any reliable research that suggests a linkage between autism and planned violence,” the Autism Society said in a statement. “To imply or suggest that some linkage exists is wrong and is harmful to more than 1.5 million law-abiding, nonviolent and wonderful individuals who live with autism each day.”

“Aggression and violence in the ASD population is reactive, not preplanned and deliberate,” he said.

For example, sometimes children with autism will get violent because they are sick or frustrated and unable to communicate how they feel.

Meanwhile, authorities are investigating the remnants of the shooter’s smashed computer, trying to find e-mails he may have sent and websites he may have visited in hopes of understanding what he was thinking, a law enforcement official said.

What happened in Newtown should never happen again, advocates on both sides of the gun control debate agree. But they’re at staunch odds about how to turn words into reality.

The grassroots group Newtown United is sending a delegation to Washington on Tuesday to meet with the Brady Campaign to Prevent Gun Violence as well as families from July’s movie theater massacre in Aurora, Colorado.

The new group, which formed out of Newtown on Sunday, aims to create meaningful dialogue — both locally and beyond — about what may have led to the tragedy.

In a Washington Post/ABC News poll, 54% of adults favor stricter gun control laws in the country, while 43% oppose.

And a new CBS News poll indicates 57% of Americans back stricter gun laws, the highest percentage in a decade; 30% think gun laws should be kept as they are.

However, less than half of the respondents in the CBS poll — 42% — think stricter gun laws would have helped prevent the massacre at Sandy Hook Elementary.

Sen. Joe Manchin, a conservative Democrat from West Virginia and a “proud gun owner,” said he’s now committed to “dialogue that would bring a total change” after the massacre in Newtown.

“Who would have ever thought, in America or anywhere in the world, that children would be slaughtered,” he asked. “It’s changed me.”

The debate is playing out not just in Newtown and Washington, but across the United States.

John Licata told CNN’s iReport there needs to be better vetting before people buy guns, and assault weapons should be banned — something Sen. Dianne Feinstein, D-California, says she’ll propose once the new Congress convenes in January.

But some say the shooting illustrates the need for more armed guards — and possibly armed teachers — in schools.

Texas Gov. Rick Perry said if school districts decide arming teachers is the best way to keep schools safe, so be it.

If Texas residents are duly background-checked, trained and have a concealed handgun license, “you should be able to carry your handgun anywhere in the state,” Perry said, according to CNN affiliate WFAA.

Gun owner Jameson Riley of Colorado said recent mass shootings have made him consider getting a concealed weapon permit.

“I have a 2-year-old daughter, and she is the light of my life,” Riley said. “And I would like to protect her.”

Out of respect for the Newtown victims and their families, Dick’s Sporting Goods has removed all guns from its store closest to Newtown, the company said.

Dick’s, one of the largest sporting goods retailers in the world, also has suspended the sale of some semi-automatic rifles nationwide, the company said.

It was unclear how long the Dick’s will keep its suspension of “modern sporting rifles.”

While adults and children try to move on, two more 6-year-olds from Sandy Hook will be laid to rest Tuesday.

Jessica Rekos was obsessed with horses — horse books, horse movies, drawing horses and writing stories about them. She was eagerly anticipating a pair of cowgirl boots for Christmas.

As her relatives grieve, they are also “trying to help her brother Travis understand why he can’t play with his best friend,” her family said.

Charlotte Bacon was a bundle of energy under her distinctive red curls. She also loved school and dresses, her grandmother told CNN affiliate WCCO in Minnesota.

The series of funerals will carry on for days. Some residents in this emotionally drained community plan to attend multiple funerals this week.