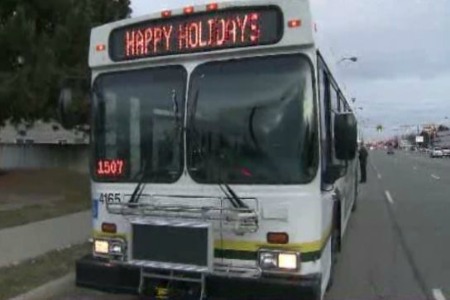 The North End Woodward Community Coalition and friends have taken to the web with their own rendition of some classic Christmas carols, hoping to draw attention to the increased wait times for buses because of cuts made by the Detroit Department of Transportation earlier in the year.

The coalition recently presented Mayor Dave Bing with petitions from hundreds of Detroiters asking him to rescind this year’s cuts in DDOT bus service. Members of the group say North End residents are twice as likely as other Detroiters to depend on the buses to get to work.

“The increased wait times were bad enough when people are trying to get to work and school even in good weather,” said Rev. Joan Ross, Director of NEWCC, in a statement. “But cold weather is upon us and it’s getting darker much earlier. The cuts in bus service are especially bad this time of year.