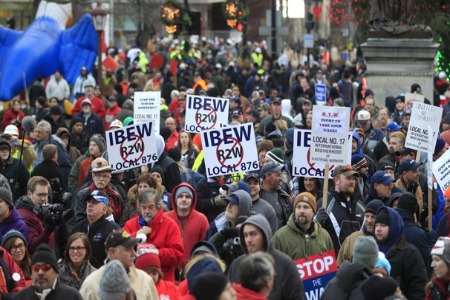 LANSING, Mich. — The conservative groups that supported Michigan’s new “right to work” law — winning a stunning victory over unions, even in the heart of American labor — vowed Wednesday to replicate that success elsewhere.

But the search for the next Michigan could be difficult.

National unions, caught flat-footed in the Wolverine State, pledged to offer fierce opposition wherever the idea crops up next. They consider the laws a direct attack on their finances and political clout at a time when labor influence is already greatly diminished.

In addition, few Republican governors who could enact such legislation seem eager to bring the fight to their states.

“There is not much of a movement to do it,” Pennsylvania Gov. Tom Corbett told a Philadelphia radio station this week, according to the Associated Press. His lack of enthusiasm was shared by two other governors who have battled with unions, Wisconsin’s Scott Walker and Ohio’s John Kasich.

“If Michigan can do it, then I think everybody ought to think about it,” said Mark Mix, president of the National Right to Work Legal Defense Foundation. He said he thinks at least one more state will adopt such a law before the end of 2013, and listed Alaska, Missouri, Montana and Pennsylvania among the top contenders. “Very confident. It will happen. [But] I can’t tell you where the next one is.”

The boisterous protesters who had stormed Michigan’s State Capitol in Lansing on Tuesday were gone on Wednesday, dispersed after Snyder signed the legislation.

Only about 30 demonstrators stood in front of the building on Wednesday, their mouths covered in duct tape that said, “$1,500 Less.” The figure represents the difference in the average annual salary of workers in right-to-work states compared with states without such laws, protest organizers said.

Andy Schor, a Democratic state representative-elect, said the push for the right-to-work measure was part of “a national effort” by outside conservative groups to undercut union power. “We’re the next domino to fall here in Michigan,” he said.

Opponents of the law said they are considering their options, including a possible legal challenge and stepped-up campaigning against Snyder, who will face reelection in 2014.

In a telephone interview, Snyder — who had repeatedly said he would not sign a right-to-work measure — sought to explain how he had changed his mind. The first-term governor, elected during the GOP wave of 2010, said he had been encouraged by the example of Indiana, which passed a right-to-work bill this year.

But Snyder said Michigan’s labor movement was partly to blame for pursuing a ballot measure this year that would have added protections for collective bargaining. It failed, helping spur the push for the legislation signed Tuesday.