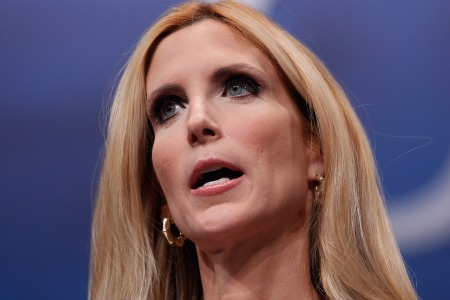 After a day of heated protests in Michigan’s capitol, Ann Coulter jumped into the fray with some harsh words for the Mitten State, as well as the city of Detroit.

“This mob cannot learn,” Coulter said on the show, in a video posted by Media Matters. “They would put their hand on a burning fire over and over again. They haven’t noticed that by supporting these unions they have lost the car companies. They have lost jobs.”

Coulter saves some ire for Detroit, reminiscing about the numerous millionaires that once called the city home.

“That is a dying state, one of the most beautiful states in the union,” Coulter continued. “Michigan has become a state like Cuba. All the people who want to work have left the state. Not all of them, there are a few left behind.”

It seems that Coulter, like Kid Rock, has something in common with Sean Penn, who also sees a strange resemblance between the Mitten State and nations located much closer to the equator. The liberal actor compared the danger level in Detroit and Port-au-Prince, Haiti, in a recent interview with Esquire Magazine.

Coulter didn’t just find fault with Michigan, however. She “blessed” the Republican-led state legislature and called Gov. Rick Snyder, one of her picks for presidential candidate in 2016, “magnificent.” Snyder initially opposed the legislation that bans unions from requiring employees to pay dues, but abruptly reversed his stance last week.

Detractors say the right-to-work legislation will defund unions while allowing employees to reap the benefits of their collective bargaining without paying dues.