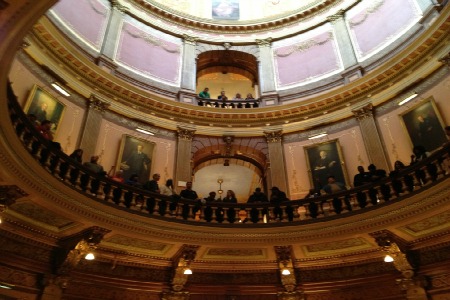 The Michigan House approved a second right-to-work bill on Tuesday that would cover all private employees, by a vote of 58-52.

Republicans have asked for a reconsideration of the votes, which means final passage on the private sector bill, SB 116, before it reaches the Michigan Governor’s desk, will most likely be delayed till tomorrow.

“It’s a sad day for the middle class and the state of democracy in Michigan when legislation that harms workers is successfully rushed through the process without any hearings or debate,” said House Democratic Leader Richard E. Hammel (Mt. Morris Twp.) in a statement emailed to The Huffington Post.

“Despite repeated calls for hearings on this legislation, Republicans insisted on moving it through the Legislature as fast as they could. We are appalled by the continued assault on the standard of living of Michigan’s working men and women.”

Protesters and union supporters have gathered in the state capitol of Lansing to oppose the bills, shouting “shame on you” in the galleries and leading demonstrations on the grounds.

The House first passed a measure pertaining with public-sector employees by a vote of 58-51. Democrats tried to have the vote reconsidered but failed.

Michigan’s Republicans hold majorities in both legislative houses – 64-46 in the House and 26-12 in the Senate.

The right-to-work legislation will deal a crippling blow to unions in Michigan, opponents say. The bills will allow employees to choose whether they pay union dues at businesses that are unionized. While supporters say that the bill will make Michigan more competitive to businesses looking to locate in the state, detractors suggest that unions will become defunded and suggest that employees’ ability to negotiate with their employers will be lessened by the new legislation.

If the bills are signed into law, Michigan will be the 24th state in America to become a right-to-work state. Right now, the state says that 17.5% percent of the state’s workers are unionized. Michigan Gov. Rick Snyder said he will sign both bills into law as early as Wednesday.

Snyder has reversed his earlier stance of discouraging Republicans from pushing for right-to-work laws and championed the bills during a press conference last week before Michigan lawmakers rammed the bills through the legislature for early votes on Thursday evening.