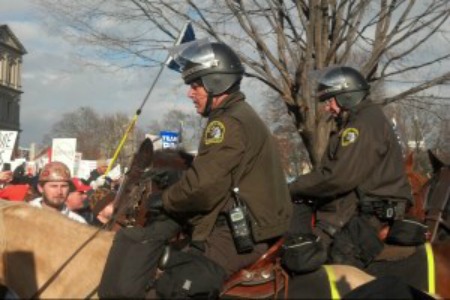 State police talking to WWJ Newsradio 950 said several fights broke out. Two people were arrested when they tried to get into the George Romney Building, a state office building that was closed.

Reporting from the scene, WWJ’s Jeff Glibert said a neon-vested volunteer working to try to control the crowd got pepper-sprayed.

In a separate incident, a demonstrator was trampled by a police horse.

At least one person was taken from the Capitol lawn by ambulance.

“There were able to get out, from what I understand. But state police say the sheriff’s department on horseback came in to restore order, which seems to have been the case so far,” Dewey said.

No one was seriously hurt in that incident but Americans for Prosperity members were led off the grounds for their safety.

The group’s Scott Hagerstrom said they lost a lot of property.

“We’ll have to access the damage,” said Hagerstrom. “I don’t know where my computer is and everything that’s on there, but the most important thing is that I believe everyone is safe. Right now, I understand, one person … their teeth got loosened.”

These were some of the first signs of unrest at the Capitol as a massive day-long demonstration continued; this as the GOP-controlled House worked to approve the right-to-work measure.

In general, right-to-work laws prohibit requiring unions from collecting fees from non-union employees, which opponents say drains unions of money and weakens their ability to bargain for good wages and benefits. Supporters insist it would boost the economy and job creation.