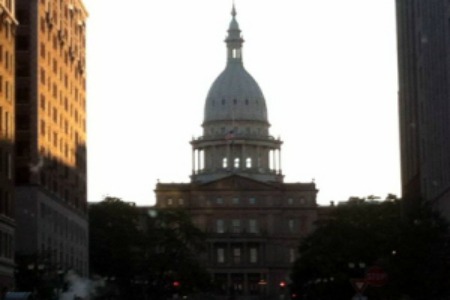 LANSING (WWJ) – Thousands of people will be at the state capital on Tuesday morning for what could be a historic day.

The Republican-controlled legislature is poised to take final action on right-to-work laws in Michigan, a state that was a pillar of the American labor movement and where the United Auto Workers union was founded in 1935.

The bills mean Michigan workers would no longer have to pay union fees for negotiating contracts and other services. Michigan House Democrat Leader Richard Hammel said he’s unhappy with the legislation.

“If I’m being provided a service by a particular organization, I don’t care if that’s a club due or if it’s something else, than I should be paying for that service that’s being provided to me,” said Hammel.

Sean McCann, a Democratic State Representative, said he’s upset there was no real debate over the bills.

“This is something that’s being crammed through lame duck because this is probably their only opportunity to really make this happen,” said McCann.

Republican Governor Rick Snyder pledged to sign the bill into law when it is presented to him.

“I’m not happy about being in this situation, but given it’s here, I’m going to do what I believe is best for the citizens of Michigan, my customers,” said Snyder.

Thousands of union members and their supporters plan to rally against the legislation.

“When you bring right-to-work issues to Michigan, the home of labor unions, I think that you’re itching to pick a fight,” said McCann.

The size of the crowd of protestors has created some tension for Stephen Kofski, the man who manages that building – which has a capacity of about 2,000.

Kofski said in a perfect world, the lawmakers would come into town, vote and then leave quickly.

“The longer they stay here, it just increases the matter tenfold. And again, everybody has a right to come in here and voice their opinion and we’ll deal with it the best way we can and let them voice their opinion,” Kofski said.

Michigan State Police Inspector Gene Adamczyki said security at the capital will definitely be heightened, to the tune of about 150 extra officers.

“People have a constitutional right to demonstrate. However, all we as is that they do it in an orderly, lawful and civil manner,” said Adamczyki.”