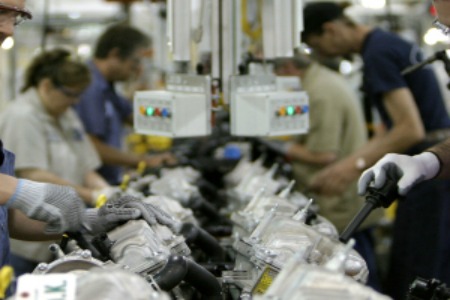 DETROIT — A slowdown in job growth is seen in southeast Michigan by Comerica Bank as auto sales are leveling off.

Comerica economists Robert Dye and Meaghan Derrick wrote that “multiple factors are shaping overall growth as we close out 2012.”

For one thing, they said, “the auto industry bailout and the subsequent gain in auto sales from a recession low of 9.0 million units (annualized) in February 2009 to post-recession high of 14.9 million units in September 2012 have brought tens of thousands of jobs back to the Detroit area. However, gains in manufacturing employment are now flattening out.”

They wrote that predicted auto sales gains in the next two years will add far fewer local jobs than the sales gains int he last two years. And, they said, government employment continues to fall.

On the bright side, housing prices are firming up and construction is picking up, but there’s still a high housing vacancy rate to work through.

Overall, the region’s jobless rate is predicted to drop from the current 10.8 percent to 8.6 percent by 2014. Migration out of the region, however, will continue. Housing starts in the region will hover between 4,000 and 5,000 units at an annual rate through 2014.