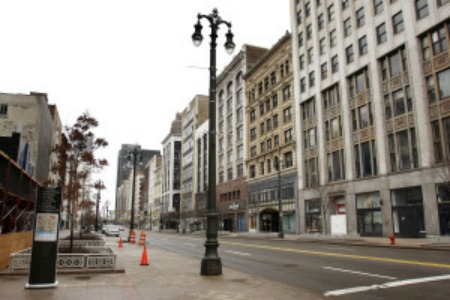 A Michigan bill that would allow the transfer municipal lighting departments to a public authority cleared the Senate Tuesday afternoon.

The legislation paves the way for the anticipated Detroit Lighting Authority, which would have bonding capacity to raise funds to replace broken streetlights, something that the cash-strapped city could not afford.

“I am extremely pleased that we are one step closer to implementing my Administration’s comprehensive public lighting strategy for the City of Detroit,” Mayor Dave Bing said in a statement Tuesday. “Today’s State Senate passage of a revised lighting bill package is a vote of approval for the creation of a Detroit Public Lighting Authority.”

For years large swaths of the city have remained in the dark as a result of financial shortfalls in the City of Detroit. Residents have grown familiar with poor lighting service over the years with more than 80,000 defunct streetlights throughout the city.

The repairs will happen as part of a long-term plan to update lighting services in the city. Officials familiar with the legislation have told residents not to expect a quick fix overnight.

“I don’t want to make our residents think that this legislation is going to get the light in right away,” Mayor Dave Bing told Council members at a meeting in October. “Even if an authority is passed through legislature the lights are not going to come on every day.” This legislation gives us the opportunity to make an investment to fix problems over a 2-5 year span.”

The state senate passed the bill with bipartisan support by a 25-13 vote Wednesday afternoon.
Introduced by Rep. Maureen Stapleton (D-Detroit) House Bill 5688 would allow Michigan cities that own their own utility company to form a public authority capable of selling bonds.
If Detroit forms a lighting authority as planned, Detroit would have to repay those bonds using revenue from the utility users tax.
The authority would oversee a plan to downsize the streetlight system in Detroit to focus on areas with higher population density or need for safety including, schools and child care centers.

At a special city council meeting on Wednesday, City Council President Pro Tem Gary Brown said the creation of a lighting authority with bonding capacity could save the city up to $8 million annually.

The bill now goes back to the house for final approval and then to Governor Rick Snyder for signature.