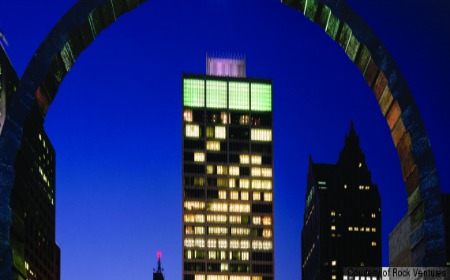 According to a release sent by Rock Ventures, which manages GIlbert’s varied investments and business holdings, Gilbert has completed the purchase of One Woodward Avenue. The 1962 building was designed by the prominent architect Minoru Yamasaki. Yamasaki’s work on One Woodward Avenue is credited as an early template that led to the architect’s design of the former World Trade Center.

“The One Woodward building is located in the heart of Detroit’s technology core, and provides us more space to further accommodate our growing family of companies and the increasing number of businesses that want to leverage the opportunities made in Detroit,” Gilbert said.

The 26-story building, which is located at the corner of Jefferson Ave. and Woodward Ave., is currently 60% occupied with commercial tenants, including several law firms and the Detroit Regional Chamber. Rock Ventures says that percentage will jump to 90% next month when Quicken Loans leases an additional eight floors in the building.

One Woodward Avenue is the latest skyscraper to be snagged during Rock Ventures’ downtown real estate shopping spree. Since January 2011, the entity has purchased 10 buildings holding almost 2.5 million square feet of office space, plus two parking garages with room for 3,500 vehicles.