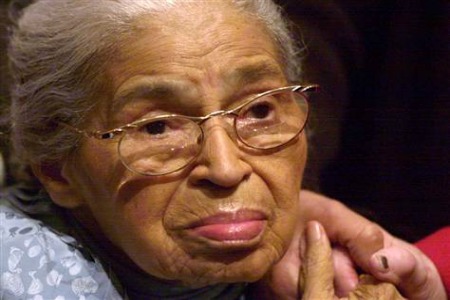 DETROIT (WWJ) – A U.S. postage stamp honoring Rosa Parks will be unveiled next year, one hundred years after the civil rights icon was born.

Many members of Greater Grace Temple in Detroit believe it’s a fitting honor for the woman who would not give up her seat on a segregated bus in Montgomery, Alabama in 1955.

The arrest of Parks that followed the incident on that bus is credited with being a pivotal point in the civil rights movement.

“She started the civil rights and she helped us to go up … that we don’t go down, we go up and lift our hearts and minds,” said Lisa, a member of the church.

“I think she did a brave thing because it was hard back in that time. I’m from Birmingham, Alabama too, and I know that we couldn’t sit where we wanted to sit on the bus,” Betty Patterson told WWJ’s Beth Fisher. “We couldn’t shop where we wanted to shop and to see her break that barrier – I think that is great.”

Parks lived in Detroit for many years and worked for Congressman John Conyers for more than 20 years. She died in 2005, and a funeral was held for her at Greater Grace Temple.

The Rosa Parks postage stamp will be issued in February 2013.