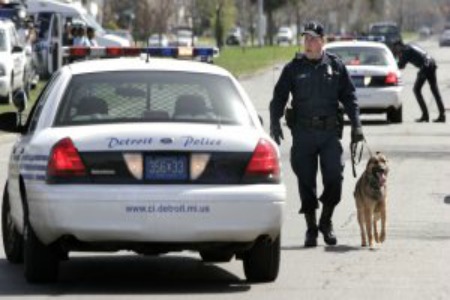 DETROIT (WWJ) – Students at Henry Ford High School in Detroit were evacuated Friday morning after an apparent bomb threat at the school.

WWJ’s Bill Szumanski was over the school in the WWJ Chopper.

“The school has been evacuated and we do have a couple hundred students over on the west side, standing in the plaza with security guards at the perimeter, keeping everyone away,” he said.

Just after 8 a.m., police were searching the school, located on Evergreen Road just south of Eight Mile on the city’s northwest side.

“A K-9 unit just pulled up to the south parking lot at Henry Ford High School. The officer and dog are now on the perimeter, sniffing out to see if there really is a bomb here,” Szumanski said.

Many students are calling parents to pick them up, although authorities have not officially called off the school day.

“They say there’s a bomb in the building, but nobody is really believing it so we’re starting to go home,” one student said.

“Yeah, they just told us to wait out here for a minute. I’m like ‘Forget it.’ I’m about to go home,” said another student.